Why did the chickens cross the road? 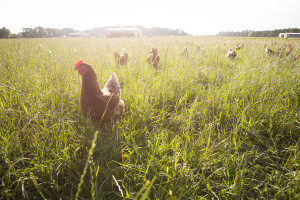 Recent news out of the poultry industry should give chickens a good reason to cross the road: to celebrate!  Over the past few months, Perdue, Whole Foods, and America’s egg hatcheries all announced they are “crossing over” to some more humane practices.

1. Perdue sees the light: If you’re inside right now, look out a window. The billions of chickens raised in America each year never see natural light. Their growth is controlled by artificial light – and it goes without saying that they’re never allowed outside.

In June, Perdue announced it will start installing windows in all of its new chicken houses and will add enrichments (such as perches) that allow birds to express natural behaviors (such as perching). The company, which raises and slaughters 700 million birds a year, will also start using a humane slaughter method called “controlled atmosphere stunning,” which does the job more swiftly and cleanly than the shackling method currently used.

It’s safe to say that Perdue would not have announced these changes and others if it didn’t see consumer preference headed towards humane farming. Consistent pressure from Compassion in World Farming and the Humane Society of the United States (as well as guidance from these advocacy groups) also led Perdue to make this smart business decision.

The company will also provide a little more space per bird and start testing slower-growth breeds. A lot more could certainly be done by Perdue — and we consumers will continue to pressure them by purchasing from more humane companies — but this is a promising start.

2. Whole Foods slows down: What’s a slower-growth breed? You could say it’s a “normal” chicken. It’s not the Cornish Cross, the breed grown most widely in America.

Cornish Crosses were developed to grow an abnormally large breast very quickly (to satisfy Americans’ preference for chicken breast). Problem is, these birds often can’t stand or walk properly because of their large breasts; their muscles develop long before their bones can grow big enough to support them. They also suffer heart and respiratory issues.

A slower-growth breed, such as the Freedom Ranger, develops more slowly, naturally, and in proportion, and is thus able to live a more humane life. Farm advocacy organizations, such as the ASPCA, are encouraging poultry companies to switch over to these slow-growth breeds.

This spring, Whole Foods announced that its markets will sell only slow-growth chicken breeds by 2024. That may seem like a long time from now, but time is required for farmers who supply Whole Foods to make the switch. And research is currently being done on the best new breeds to choose.

3. New ideas are hatched: Most people don’t know that egg-laying hens are usually born in hatcheries. Your neighbor down the road who keeps egg-laying chickens in her backyard? They came from a hatchery. The factory farms in Iowa and Ohio that produce billions of eggs a year? They get their hens from hatcheries. 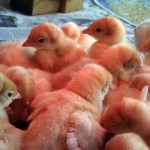 But at these hatcheries, the hens who produce all our future hens sometimes hatch out male chicks. And no one wants those little guys because they can’t produce eggs one day, and they won’t grow up to be big meat chickens because they’re an egg breed, not a meat breed. So in most hatcheries, male chicks get ground alive – yes, ground up while still conscious – or they are gassed or suffocated. These methods are seen as easy ways to get rid of a “waste product.”

In June, however, the industry group that represents most of the nation’s hatcheries – United Egg Producers – announced that major hatcheries will phase out the culling of male chicks by 2020, or perhaps sooner. Their most promising alternative? In-ovo sexting, a new technology out of Germany and the Netherlands that identifies the gender of a chick while it’s still inside the fertilized egg. These eggs with male chicks can be discarded before the chicks are born or have even developed fully into chicks. Other scientific methods of “egg sexing” are also being explored.

This announcement surprised the farm animal welfare community, which has largely been focused on eliminating cages for egg-laying hens. But the Humane League has been quietly working on this issue with the UEP for some time.

So… when someone asks, “Why did the chicken cross the road…” you’ll already know why. Go join the celebration.

Want to buy chicken from humane farms or companies?  Here’s how.