Ah, we humans… we’re fiercely loyal to our tribe — the people we work with, our local sports team, our family, our country… until we realize our tribe is engaging in offensive acts, and we fiercely disapprove, and we turn on our tribe and tell other tribes what’s going on.

Regardless of what you think of Edward Snowden, he is the most high-profile example of a whistleblower lately. And now we have a farmer example: Craig Watts, who works for Perdue and who opened up his cramped North Carolina chicken house to cameras from the group Compassion in World Farming (CIWF). He was eager to show the type of farming that people support when they buy Perdue chicken — chicken that, until a recent legal settlement, had been labeled “humanely raised.”

CIWF released the video last week, and let’s just say that it provides humaneitarians with no better encouragement to choose better chicken.  (No graphic footage here, so do watch.)

Of course, you might be asking: Why doesn’t Craig Watts take steps to alleviate the suffering of his birds?  The reality is, they’re not “his” birds. He is bound by his contract with Perdue to raise the chickens exactly the way Perdue wants.  He isn’t allowed to open the doors of his chicken house to let in fresh air – it’s not in the protocol. He isn’t allowed to put in windows for sunlight – it’s not in the protocol. If he wants to replace the litter in his chicken house more often, “the cost is on him,” according to Leah Garces of CIWF (the activist in the video).

About the only thing Craig and other contract chicken farmers can control, Leah says, is the temperature of their chicken house — although she notes that while she was at Craig’s, the fans were on full blast, yet the chickens were still panting. (Last week, after the video was released, Perdue commenced an animal welfare audit on Craig’s farm.)

This isn’t the first time a fed-up farmer has let a camera into their industrial chicken house. Remember the chicken farmer in the 2009 documentary “Food, Inc.”?  Carole Morison, who I interviewed a couple of years ago, also worked for Perdue when she decided “to say what I have to say.” The footage of her chickens shocked millions of viewers, and the scenes inside her chicken house remain the most memorable ones in “Food, Inc.”

Carole, whose contract was terminated by Perdue just before the documentary came out, is now a very happy farmer in Maryland, selling eggs from pasture raised chickens. In a blog post last week, she echoed what Leah Garces pointed out — that Craig Watts has been calling for change within his industry for a while. Carole writes:

Having known Craig for quite some time I’m not at all surprised at what he has done. He has been simmering like a pot of water on a stove for a long time. He’s tried talking to Perdue representatives, he’s shocked them with video before Compassion in World Farming came along, and most often was given a message in some shape or form of keep your mouth shut. It’s nothing new and every contract chicken farmer knows it.

Farmers like Watts have little freedom in choosing how to raise their chickens, and they have no control over the kind of bird that is delivered to their farm. Chicken farmers live in perpetual fear that companies will cancel their contracts, so they rarely speak with reporters. 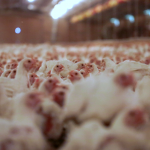 Chickens at Craig Watts’ farm (from CIWF; click to enlarge)

When a mutual contact introduced Craig Watts and Leah Garces, it was not a given that they would eventually produce an exposé that would receive over a million views in the first week and be covered in the New York Times. In fact, Leah told me she was extremely on edge as she drove to Craig’s farm for the first time, even though she knew he’d worked with Farm Aid and had spoken openly about Perdue raising practices before.

“Activists and [industrial] farmers are normally pitted against each other in the public sphere,” Leah says. “We don’t collaborate.” But she knew she’d found a “kindred spirit” when she heard Craig refer to his chickens as he and she — not it. “He recognized that they were individuals.”

Leah, who was in Washington, D.C. yesterday to speak with USDA officials about the allegations in the video, believes now that fed-up farmers and agricultural activists working together is the only way to change the chicken industry. “This is a dynamite combination that the industry cannot withstand,” she says.

What about the rest of us, though?  Besides purchasing pastured, free-range, organic, or humane certified chicken (to demonstrate to the industry that there is a demand for better chicken), what can we do to support farmers like Craig?  I’m sure many of you agree with this comment posted on Wired.com on Dec. 8:

I wish there was a way to contact Craig…. I would tell him there are SO many on his side!!! He is so brave to stand up for what is right! Maybe he could start a ‘go fund me’ campaign to ditch perdue and start a free-range, grass-ranging chicken farm? Have no idea if he could get out of Perdue’s contract. Good luck to him – we are all sending him positive thoughts & prayers. xx

You can post comments for Craig below (I’ll pass them on to Leah) or on CIWF’s Facebook and Twitter feeds. Even better, you can sign CIWF’s supermarket petition and keep up with their Better Chicken Intiative, all by going to this page.

As for Craig, is he thinking of following in Carole Morison’s footsteps and switching to a pasture-based farm? “I think that’s for him to answer,” Leah says. “We’ll just have to see what happens next.”