Gathering the herd: The first “Meat-Up” 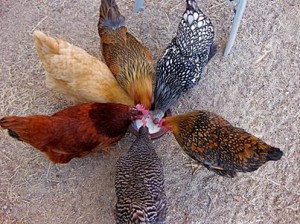 Next week, the first gathering of the Northern Vermont Humane Meat-Up will take place. This is a new group that’s open to anyone interested in talking about (and eating!) humanely raised meat — ordinary consumers, humane farmers, people who know a lot about humane purchasing, people who know nothing at all…

The idea is to start meeting each other. Early in the days of veganism and vegetarianism, people gathered in little groups, and eventually held conventions, and that’s how these worthy movements got started. Humaneitarianism is still in its infancy, but a lot of us are out there. Let’s meet and get this way of eating into the popular consciousness… together.

Hopefully the Vermont pilot of this meat-up, facilitated by the popular website Meetup, will be replicated in other towns/cities, so that eventually there will be pods of humaneitarians (or ethical omnivores, conscious carnivores, whatever you like to call them) established all over the country. All it takes is a lead organizer who can set up a Meetup page for his/her area (Humaneitarian can offer guidance and will consider donating the Meetup fee) plus a venue where people can gather. Already, a new meat-up has been launched in Atlanta.

UPDATE!  A delightful evening was had by all. We had farmers in attendance, newcomers to humaneitarianism, and folks who have been eating this way for a while. The after-dinner discussion was fun and meaningful. Thanks to all!