What my cat teaches me about humane farming 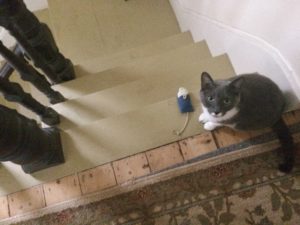 My cat, and his fabric mouse

If you aren’t sure what humanely raised meat is, or which farms or food companies to buy from, think for a moment about your cat or dog (or someone else’s).

You probably know that a household pet engages in some pretty quirky behaviors during the course of a day. Since I’m a cat person, I’ll list a few fascinating things my cat likes to do but doesn’t have to do for his survival:

These actions are not unique to my cat, of course, but all cats — even ones that live indoors and are well-fed, with no need to capture food or hide from threats. The fact that cats engage in these “natural behaviors” no matter what their circumstances indicates that evolution has deeply ingrained these behaviors in them. They’re propelled to act like this no matter what, because these actions once helped them survive.

The same with dogs: dog owners often say they need to take their canine out for a walk or let it chase a ball because it needs exercise or is bored. Yet the dog could also be wanting to express behaviors that, thousands of years ago, brought its ancestors food. 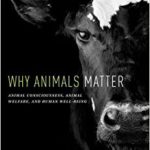 Animal behaviorists study animal actions such as these. One of them is Marian Stamp Dawkins, a professor at Oxford, who writes about the behavioral tendencies of farm animals in her excellent 2012 book, “Why Animals Matter: Animal Consciousness, Animal Welfare, and Humane Well-being.”

In her book, Prof. Dawkins distinguishes between an animal’s “needs” and its “wants.”  An animal’s needs are for food, shelter, and freedom from being eaten by another animal — things it needs for simple survival. Its wants are the mechanisms/actions by which the animal gets those needs met.

When animals are raised in places where they can’t express their behavioral wants (say, a factory farm, or the home of your uncle who never plays with his dog), frustrations take hold and animals exhibit signs of agitation and psychological stress.

“Good welfare, therefore, has to cater not only for what animals need to keep them alive but also for what they want,” Dawkins writes.

Here’s the connection with farm animals: they’re no different than cats and dogs. They have behaviors they want to engage in (no matter how safe or well-fed they are by humans) because those behaviors make them feel like they’re obtaining what they need. And so: 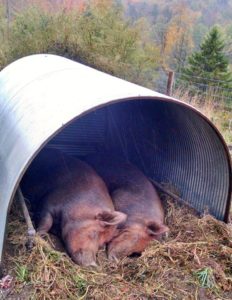 How do we know what farm animals want to do, or what makes them feel at ease and in control?  Methods of measuring animal contentedness vary, and are the subject of debate within the animal welfare community, but when animals aren’t acting abnormally, it’s usually a sign that they’re content. (For example, it’s not typical for pigs to bite each others’ tails, which often happens in cramped factory farm conditions that no one would call “natural.”)

You might think it’s charming, or perhaps ridiculous, that animals express behaviors they don’t really need to. But “just in case you are beginning to feel superior to animals that do such ‘silly’ things,” Prof. Dawkins writes, she points out that humans aren’t exempt from this tendency: she references an experiment in which people were more likely to pay for a coffee at an unstaffed ‘honesty box’ when there was a photo of a pair of eyes next to the coffee. We’re wired to respond to eyes, even when they’re fake.

This is where ‘enrichments’ come in: enrichments are objects that allow animals to engage in the behaviors they want to express. (Enrichments for your pet would be a laser toy for your cat or a Frisbee for your dog.) Typically, enrichments are used when farm animals are raised indoors, away from the natural surroundings their ancestors evolved in.

Of course, if a domesticated farm animal is raised in an environment that mimics that of its wild ancestors, enrichments aren’t needed. Hogs raised in the woods, for example, don’t need plastic rubber balls or nests because they have places to explore and take cover.

How can you know if a farm uses enrichments?  Ask them!  Talk with farmers at your local farmers’ market, or visit their farm. If you buy meat at a grocery store, research the companies that provide meat to your supermarket.

If you shop at Whole Foods, you’re in luck:  their GAP rating system (GAP stands for Global Animal Partnership) can help you buy meat 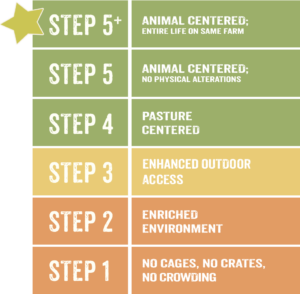 from farms that use enrichments.  For example, meat products rated at Step 2 and above come from farms that provide either indoor enrichments or pasture conditions where natural behaviors can be expressed. Meats with the humane certification labels “Certified Humane” or “Animal Welfare Approved” also indicate that the animals were given enrichments.

As I’ve said before, I’m not here to tell you what to buy — you have to decide for yourself which animal products you’re comfortable with. It could be that an “enriched” indoor environment isn’t enough for you — you want meat from animals that lived outside. But if you’re still formulating your own personal standards, consider purchasing meat from farms that at least provide animals with enrichments.

On the flip side, some of you might already be purchasing meat raised this way, but you feel guilty for not playing enough with your pet. I count myself among you. So with that, I’m going to end this post and go bounce some feathers around my well-fed cat.