Weaning: What is it, and why care? 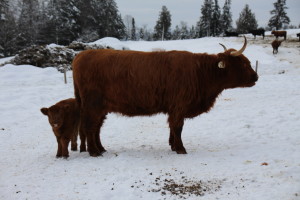 I can still remember my first day at nursery school. It involved a lot of screaming. It involved feeling sick to my stomach from all my crying. It involved someone eventually taking my hand and dragging me out of the hallway, where I had refused to leave my mother, into the bright, white classroom that I would eventually — eventually — come to love.

I was helpless and confused in the new environment — new peers, new surroundings, new expectations, new food. And I was completely alone.

Perhaps this is why the issue of weaning on farms holds particular resonance for me. When young animals are abruptly separated from their mothers, earlier than nature intended, they may not stomp the way I did in nursery school (and animals don’t cry) but they do show signs of stress, triggered by new peers, new surroundings, new expectations, new food. Scientific studies have documented the ‘sterotypic,’ or uncommon, behaviors that a young animal will engage in after early weaning. Calves will pace and moo and eat less. Piglets will belly nose their young pen mates in an effort to milk.

Weaning is tough on mother animals, too, who can’t rationalize the separation the way my mother could at nursery school. Cows, for example, will moo for their offspring for many days. They may pace around their pen, too, searching for their calf. When I first heard, on a cattle ranch, the sound of weaned calves calling for their mothers, and the mothers calling back, the sound was piercing, agonizing. I knew exactly what was going on.

As with nursery school children, separation anxiety does dissipate in young farms animals, but it leaves a mark: beef calves that are abruptly weaned and not allowed any sensory contact with their mothers have been found to eat less, and thus put on less weight. This makes weaning an economic issue for farmers, and this is why fenceline weaning and other forms of humane weaning are beginning to be practiced on some farms and ranches. 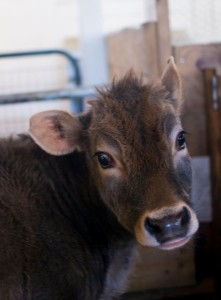 If you’re curious about alternative weaning practices, or why farms and ranches need to wean in the first place, you can read my current article in The Atlantic (originally published on Civil Eats). It focuses on one farm, Greenfield Highland Beef, where newly weaned calves and their mothers are allowed to keep visual and olfactory contact by living on opposite sides of a gate. Alternative humane weaning practices are also being tried on small dairy farms, mainly in Europe.

Currently, there are no labels on meat or dairy packaging that tell consumers exactly how or when animals are weaned on a farm (although Certified Humane and Animal Welfare Approved do require slightly less conventional ways of weaning). You’ll just have to ask a farmer at a farmers’ market, or a rancher who you know, whether they’ve tried, or even thought of trying, a new way of weaning.

And if they are doing things differently, thank them. As I learned in nursery school, be nice to everyone.