At the New England Meat Conference 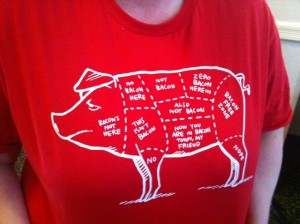 A t-shirt spotted at the New England Meat Conference

Nothing like a meat conference to get your juices flowing!

The first (and hopefully now annual) gathering of New England meat producers and processors was, as someone said, a fantastic “peek behind the curtain” at all the moving parts that make local meat happen. When we eat humanely raised meat, do we ever think of the guy who sells poultry processing equipment, the bookkeeper at the rendering plant, the slaughterhouse operator, the trucking distributor, the health inspector, the artisan butcher, the farm auditor, or the animal science researcher?  It truly takes a village to serve a steak, and members of this village were well represented at the conference. 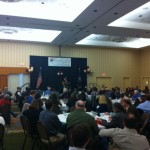 Of course, right now there isn’t enough local meat in New England to feed even one meatball to all of the 14.5 million people who live in the region. But that was the point of the two-day March conference — to boost New England meat production by sharing ideas from different states and contemplating regional marketing.

One project I loved hearing about was the mobile poultry slaughterhouse on Martha’s Vineyard. Just a 10-ft. x 5-ft. trailer, it has helped Vineyard farmers go from raising 200 birds in 2007 to 9,000 birds in 2012!   Previously there was no way to process poultry on the island, and ferry fees to the mainland made poultry production cost prohibitive. Now a crew of 6 to 8 part-timers takes the unit around to farms. They can process up to 150 birds in 7 hours.

Why should a humaneitarian care about mobile slaughterhouses?  Because they allow animals to be processed on the farm where they were raised, avoiding the risk of stressful transport to a faraway slaughterhouse in a stifling hot or freezing cold truck. A number of states are experimenting with these mobile units; it can be quite a challenge to make them profitable, but folks are trying.

Out behind the conference hotel was an actual mobile unit for poultry, built by the Hannaford Career Center in Vermont, which runs a meat processing course as part of its sustainable agriculture program. Here’s a quick video I took of unit manager George Eisenhardt, showing off the unit’s gleaming stainless steel:

[vimeo]http://www.vimeo.com/62785735[/vimeo]
Another highlight of the conference were the laughs and commiseration shared by the women (and a few men) who attended a panel discussion on women in the meat business. It was led by two farmers, a butcher, and a slaughterhouse manager. The heartwarming discussion veered between the hilarious (“I once walked into a meat cooler to see a man standing there in his underwear”) to the inspiring (“Do every job [on a farm or in a slaughterhouse]. No one can criticize you if you’ve done everything once.”)

The New England Meat Conference was definitely producer-oriented — I may have been one of the few ordinary consumers there. But you, reader, were there in spirit: a lot is being done behind the scenes to bring humanely raised meat to your table.