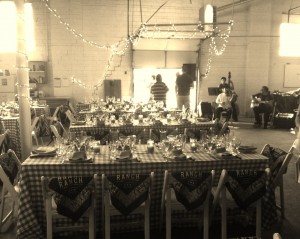 Before the celebratory bison dinner at Slow Meat 2014

But a bison was the true star. A particular bison born and raised on grass in Colorado. A bison that lived the way Lewis and Clark might have seen its ancestors roaming the American plains a couple hundred years ago.

The bison was served at a celebratory dinner for conference participants, prepared by local chefs. It was also the centerpiece of a fascinating butchering demonstration. More significantly, it symbolized what the Slow Meat conference was trying to advance: a system of American meat production in which animals are raised humanely in their natural surroundings without causing harm to the environment or human health.

Ok, that’s a lot of symbolism to put on a bison. But we were in Denver, in American ranch country — it fit. 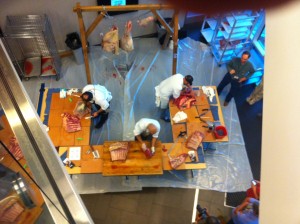 for different tradespeople in the meat business. But Slow Meat 2014 was national in scope, focused solely on sustainable, humane meat production, and featured a wide range of people in the meat biz — ranchers, butchers, policy advocates, scientists, owners of small meat companies, farmers raising heritage breeds, and folks like me educating consumers about the better choices available to them.

Organizers at Slow Food USA wanted that kind of breadth. They’re starting to make meat issues a focal point of the organization and gathered all of us together to provide some guidance. For those who don’t know, Slow Food USA has chapters around the country, its members devoted to learning about, and sharing, local food cultures. As a branch of Slow Food International, which has 150,000 members, Slow Food USA is part of a worldwide movement to restore a sense of place to food, support farmers who engage in best practices, preserve foods and flavors that are at risk of disappearing, and encourage a slowing down in the production of food and its enjoyment (read: the antithesis of fast food).

A few workshops were held at Slow Meat but it was the networking and socializing — and eating! — that revved up the metabolism of the weekend. A few highlights: 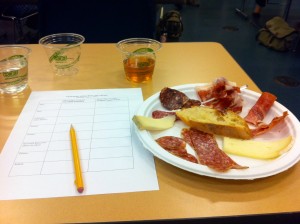 food education. As it seeks to find its niche in the sustainable meat movement (it is debating how much policy work to get involved with), I trust that Slow Food USA will stay true to its core values and I bet it will end up being an organization that can continue to effectively gather disparate players for discussion and brainstorming.

Personally, I was happy to engage with people at Slow Meat 2014 who I wouldn’t normally run across, folks who aren’t necessarily focused on animal welfare but who totally get it, and who would be great to collaborate with as Humaneitarian moves forward. I was especially excited to meet blogger Rebecca Thistlethwaite, Tom Parks and Joe Maxwell of the Humane Society of the U.S., Kendra Kimbirauskas of the Socially Responsible Agricultural Project, Marissa Guggiana of the Butcher’s Guild, Jeannette Beranger of The Livestock Conservancy, Elisa Demichelis of Slow Food International and, as always, the folks from Animal Welfare Approved and the American Grassfed Association.

If you’re an average consumer reading this, just know there’s a myriad of people working to get ethically raised meat to your plate. And we are moving forward together.