Recipe for a mobile slaughterhouse 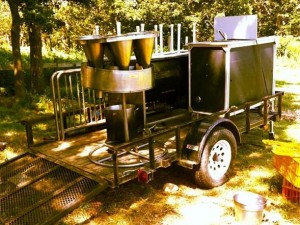 Yes, this is a slaughterhouse – Martha’s Vineyard style

Ali Berlow’s recipe for roast chicken is different than your grandmother’s. To make Ali’s roast chicken, you need a bird that was humanely processed in a small-scale, mobile slaughterhouse — like the one Ali helped build on Martha’s Vineyard a few years ago.

And to build such a slaughterhouse (according to Ali’s recipe) you need to gather certain ingredients, like a landscaper’s trailer, a chicken plucker, really sharp knives, and a crew of skilled workers. You need to research state health laws, train your crew, and ignore nay-sayers who don’t believe it’s possible to build a small local slaughterhouse from scratch. It also helps to throw in a pinch of regular communication with the residents of your town.

Ali Berlow’s “recipe” for building a slaughterhouse is on page 12 of her recently published book, The Mobile Poultry Slaughterhouse: Building a Humane Chicken Processing Unity to Strengthen Your Local Food System (Storey Publishing, 2013). It’s a slim volume that belies the amount of work demanded by such a project. But throughout the book, Ali encourages local food enthusiasts around the country to do what her Martha’s Vineyard community did. As a writer and editor (for a number of years she edited Edible Vineyard magazine), she had no prior experience farming, slaughtering, or building anything. But together with some chefs, farmers, and the Island Grown Initiative, she helped make Vinyeard-grown chicken a reality.

Such chicken didn’t exist on Martha’s Vineyard before the slaughterhouse was completed in 2011. Vineyard farmers had to ferry their birds to mainland Massachusetts for processing, which cut heavily into their profit margin and time. Only 200 birds a year were being raised. But in 2012, some 9,000 chickens were raised and slaughtered “on-island,” and about 20,000 birds have been processed on about a dozen farms and a dozen homesteads since the slaughterhouse began operating.

The 10′ x 15′ unit is driven with a small truck from farm to farm, and processes up to 100 birds a day using an average crew of three to five. From a 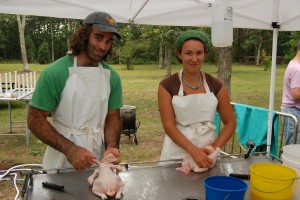 Jefferson Munroe and Emily Palmer, on the chicken crew

humane standpoint, the chickens have it a lot better than if they were transported for hours to a slaugherhouse. They go straight from their pasture or barn into the trailer, where they’re killed with a quick slit to the carotid artery just below the jawbone, which cuts off blood flow to the brain and, thus, consciousness.

“These days are honorific, a testament and proof to life cycles, and you get to be a part of it,” Ali writes in her book, which features a forward by humane slaughtering guru Temple Grandin. Ali has never killed a bird herself, though. “I frankly just don’t have that in my constitution, to take a life,” she told me on the phone. “I know that sounds contradictory, since I helped build a slaughterhouse, but… I’d rather make it possible for other people to do it.”

As you might expect, Vineyard-grown chicken costs a lot more than the factory farmed chicken found on island stores – $5 to $6 a pound, compared to the roughly $1.75 a pound for conventional chicken. But the local birds have sold like hot cakes on the island, which has a vibrant local food scene, and this has helped farmers thrive in a tough profession.

There are other mobile slaughterhouses around the country — some bigger than the Vineyard’s, some the same size. (I recently wrote an article about new non-mobile units in Vermont.)  They’re becoming a desirable alternative to traditional local slaughterhouses, because they offer a less stressful process for the animals, and farmers aren’t burdened by transport. Plus, many local slaughterhouses are operating at full capacity these days; smaller units can take some pressure off them.

But barriers to creating a mobile slaughterhouse can be daunting. The Vineyard unit cost a relatively reasonable $20,000 — funded by individuals and business donations — but it also required a brave posse of dedicated volunteers.

“If you decide to build a mobile poultry slaughterhouse,” Ali writes, “be aware that you are pioneering in uncharted territory. Like every ‘early adapter’ you are very likely to encounter resistance… You will be told that this is impossible, illegal, cruel, dangerous, dirty, gross. By persevering, however — calmly, mindfully, methodically, strategically and transparently — you will ultimately enhance the quality of life in your community.”

Anyone up for such a challenge?  Start with this practical and inspiring book. 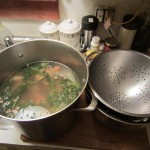 How to make chicken stock