Pounding the Pastures at HSUS 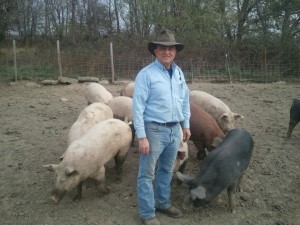 Joe Maxwell, Missouri pig farmer and head of the new Rural Outreach program at the Humane Society of the U.S.

It’s easy to get the impression that the Humane Society of the United States doesn’t really have a taste for meat.

On its website, you don’t see recipes for barbecued pasture-raised pork, grass-fed beef stew, or free-range roast chicken — which would indicate that the country’s most effective group working to end factory farm abuse supports humane animal farming.  Instead, their page on humane eating introduces you to Meatless Mondays and a Guide to Meat-Free Meals. Other links take you to a list of vegetarian cookbooks or profiles of celebrity vegetarians.

The vegetarian bent probably reflects the fact that, as one staff member told me, a sizable majority of the organization’s 700-or-so employees are either vegan or vegetarian. What the veggie info on the website doesn’t reflect is that HSUS has begun reaching out to poultry and livestock farmers across America to help them transition to humane practices and find new markets for their meat, dairy, and eggs — hardly a pro-vegetarian endeavor.

The new Rural Development & Outreach program launched two years ago, although it’s only coming into its own now. (It launched its Facebook page this August.)  The program is staffed by two livestock farmers and at least one proud eater of humanely raised meat, and is advised by a handful of farmers and ranchers across the country. They provide agricultural info to HSUS and advise farmers who want to switch to more humane practices.

“I can’t imagine what my vegan colleagues were thinking when Wayne hired a pig farmer!” says Joe Maxwell. He’s the pig farmer hired by HSUS president Wayne Pacelle a few years ago to shepherd the new program. A former state legislator in Missouri (or “Missoura,” as he says in his thick drawl), Maxwell caught Pacelle’s attention for his work on state-level animal cruelty laws. He is now the Vice President of Outreach and Engagement at HSUS, with “a seat at the table,” as he says, in the upper echelon of HSUS leadership. (It should be noted, however, that there aren’t any farmers or ranchers on the HSUS board of directors.)

Maxwell joined the group knowing full well that its reputation in the American heartland is one of being anti-farmer and anti-meat. This isn’t just because the website has so much information on vegetarian eating. It’s also 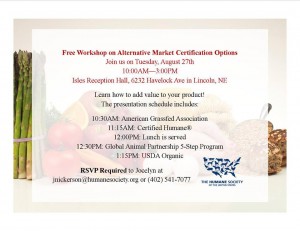 because, as the Boston Globe has reported, organizations tied to Big Ag are actively questioning the motives of HSUS in rural areas, with the result that many farmers seem to think HSUS is out to create a vegan utopia. (If that were true, HSUS members — the vast majority of whom are meat-eaters — would probably cancel their memberships tomorrow. In fact, the HSUS’s official position on eating is to encourage “the 3 R’s” — reduction of meat consumption, refinement of consumption by switching to humane products, or replacement of meat with plant-based foods — only one of which is an animal-free approach.)

Some of Maxwell’s friends therefore thought he was abandoning his rural roots when he started pounding the pavement — or rather, the pastures — for HSUS. But he did it because he cares deeply about animal welfare (the 300 sows on his pig farm are certified at Step 3 by Global Animal Partnership) and he sees that industrial ag has treated farmers as contemptuously as animals.

“Many of us [who care about farm animal welfare] were marginalized in the 1990s and early 2000s – our voice was silenced,” Maxwell says. “Even today, we’re told we’re old-fashioned, eccentric, that organic people are crazy, that we’re hippes. But as I go out and talk and stand up, I’m seeing a renewed confidence among farmers again.”

So far, the Rural Development and Outreach Program has spent its time organizing a handful of “state agriculture councils” in major agricultural states. There are now councils in Nebraska, Ohio, and Colorado, each one with 5 farmer-members who advise other farmers on humane practices.

Of course, there are many kinds of “humane practices” in agriculture today, from free-range to pasture-raised to everything in between. Asked what 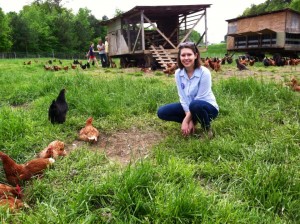 Angela Huffman, market development coordinator for the Rural Outreach program, and a humaneitarian.

kind of farming practices HSUS promotes, staff at the Rural Outreach program said there isn’t one particular approach that is advanced; farmers are presented with alternatives to standard industry farming and invited to choose the approach that works best for their farm. Most council members run grass- or pasture-based operations, but there are no formal requirements for being on a council.

Referring to the farmers now on the Ohio council, Angela Huffman, market development coordinator for the Rural Outreach program, recalls that, “It took a lot of work to even get a first meeting with some of those farmers.”

Yet Maxwell says HSUS support of humane farming is not new. He notes that in 1993, HSUS published a directory of farms across the country that sold humanely raised animal products. But as the organization began to focus on factory farming in the late 1990s and 2000s, Maxwell says it didn’t pay enough concurrent attention to humane farming, leading a “vacuum” to arise that allowed industrial agriculture to argue that HSUS didn’t care about farmers.

“If you aren’t for something, your opponents will define you,” he says. “As a former politician, I know that’s a horrible thing to overcome.”

Of course, there will always be people who say that the Rural Outreach program is there simply to make the organization look more pro-meat. But if HSUS were really aiming for a meatless world, why would it be allowing its new program to actually be effective, which it is starting to be?

Maxwell acknowledges that the process of bringing humane issues back to agriculture is slow, happening farm by farm, but he’s in it for the long haul.

“It took 30 years to drive farmers off the land and animals into crates and cages,” he says. “So we’re taking the long view on this.”