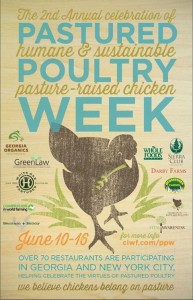 Georgia isn’t on my mind very often (I live closer to Canada than to Cuba) but for many years Georgia was probably on my plate — in the form of factory farmed chicken. The state raises more chickens than any other — 1.4 billion a year — so before I became a humaneitarian I’m sure I ate a lot of this industrial export. Who knew the peach and peanut state is also the poultry state?

“Probably most Georgians don’t know that, either,” said Leah Garces when I called to ask her about Pastured Poultry Week, happening June 6-14 in Georgia and New York City. Leah is the director of the USA branch of Compassion in World Farming, a UK-based nonprofit. She works out of Atlanta and recently wrote a not-so-happy report on Georgia poultry that outlines the leg disorders, heart and lung failures, crowding, unnatural lighting, and stressful transport that many industrial chickens endure.

Compassion in World Farming and a handful of other groups organized Pastured Poultry Week to draw attention to the imbalance in Georgia’s poultry production and possibilities for the future. “We want to be the number one producer of pastured poultry in the world,” Leah said, adding that she believes this is possible because a lot of farmland in Georgia isn’t being used. The goal of being number one may sound ambitious, but it starts with awareness events like PPW.

Next week, about 55 restaurants (mostly in and around Atlanta) will feature pastured chicken on their menu. Last year’s week-long event was extended to New York City this year to spread the message that pastured poultry is better for animals, the environment, and worker health. So two dozen restaurants in NYC will also serve pastured poultry next week, even though the New York area doesn’t have as much access to pastured poultry as Georgians do. That said, Georgia restaurants do face a unique challenge: “local chicken” can easily mean “factory farmed chicken.” Restaurants sometimes think they’re serving humane, sustainable poultry because it’s from nearby, but Leah says she has to tell them it’s not what they think.

Consider eating at a participating Georgia or NYC restaurant next week and ordering the chicken. Or show your support by purchasing a whole bird from your farmers’ market and roasting it at home.

In celebration of Pastured Poultry Week, here’s an informal video  I took recently of a culinary student dividing a whole chicken into parts before cooking it. Apparently there are other ways to cut a raw chicken — some people remove the wings and legs first, as shown in this illustration — so this is just one approach. Thanks to Dylan Miller, the student here, who attends the New England Culinary Institute (NECI). This was taken at a local farmers’ market.