Order up: Pork for a billion 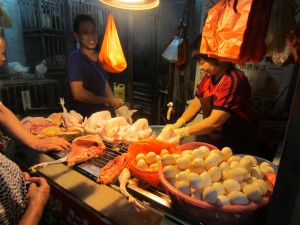 Butcher’s stand in a Guangzhou market

Not everyone in China eats meat. As I discovered on my recent 2-week trip through the world’s largest meat producing country (yes, China has surpassed the U.S.), many practicing Buddhists are vegetarian, as are other small sectors of the population. But everyone else in this country of 1.3 billion people seems to adore meat, and in China that means pork.

(Just ask the pig who was squealing for his dinner outside the window of one restaurant our group visisted. We didn’t eat meat in China, for humane and hygenic reasons, but meat made its presence known, not only beneath restaurant windows but in fermenting jars, shrink-wrapped packages, and cages at the back of butcher’s stands.)

What makes “pork + 1.3 billion people” a humane issue?  China is rapidly getting richer, which means that an increasing number of Chinese can now afford a steady supply of meat, and foreign investors are responding by financing new factory farms in China.

Nearly all Chinese pigs used to be raised in people’s backyards. In 2009, that number had shrunk to 27% — most pigs that year were raised in small commercial operations (51%) or factory farms (22%), according to a report by the Institute for Agriculture and Trade Policy. Aware of the growing consumer demand for meat and the Chinese government’s eagerness to further industrialize its agricultural sector, global financial institutions are now investing in large-scale Chinese animal farms.

One of the largest factory farms in the world could end up being a planned one in Henan province called Muyuan Pig. It’s being partially funded by the International Finance Corporation (IFC), which is affiliated with the World Bank. According to an IFC document, this “farm” is expected to produce 1 million hogs a year. Wow. Other entities such as the Asia Development Bank and the European Union have financed China’s livestock industry.

Now, it’s possible — because anything is possible — that China’s factory farms are making animal welfare a priority. But in fact, the kind of housing that animal welfare organizations are trying to ban or curtail in the U.S. – gestation crates for pigs, barren battery cages for laying hens – are on the rise in China. Peter Li, the China policy specialist for Humane Society International, interviewed farm managers at these facilities a few years ago, and they spoke of these Western farming innovations “glowingly.” 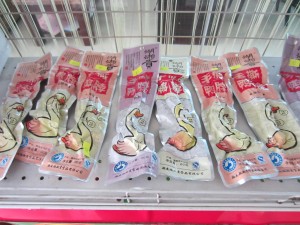 “To Chinese officials, adoption of the Western farming model was a proud sign of progress,” Li wrote in a 2009 paper. “They generally thought that farm animals lived a much better life on factory farms than on peasant backyard farms.”

I called Peter Li to ask him why factory farming is so embraced in China. He believes it’s being driven by demand. Most Chinese people over 45 years old lived through (and still remember) the Mao era, when starvation was rampant due to economic mismanagement. Now that China is rich enough to raise plenty of meat, people generally don’t question any aspect of meat eating — they just want the reassurance that meat is abundant.

“When you say to people, ‘Stop eating meat,’ they say, ‘Why? We were starving for so many years in the past and now we finally have the ability to eat more meat.’ They can’t understand.” Li says.

The Chinese government believes boosting meat production can therefore help restore the Communist Party’s legitimacy among people who still have nightmares about what the government once did to them. In fact, the party is so concerned about what would happen to the social and political order if there was a meat shortage that it has created a “national strategic pork reserve,” which operates much like the strategic oil reserves in the U.S.: when pork supply is low or the prices too high, reserves of the meat are released to satiate the people.

(Interestingly, though, while pork production is up, pork consumption is on a slight decline in China relaive to chicken and beef, which are becoming more popular.)

This can all leave a humaneitarian feeling pretty depressed. But Li stresses that younger Chinese people are taking a more compassionate attitude toward animals of all kinds, including farm animals, thanks to the complex social, economic and political changes occuring in the country. 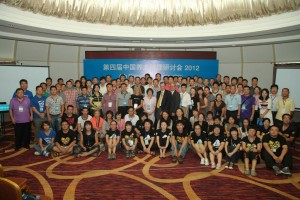 He says the small but growing number of animal activists in China are aware of factory farm issues, though they tend to focus their campaigns on dogs, sharks, and bears. Current campaigns at one HSI partner organization in China include getting McDonald’s in China to phase out gestation-crate pork, and encouraging Meatless Mondays on college campuses.

What can we do as Americans about factory farming in China? We can’t tell the Chinese how to raise their farm animals any more than they can tell us how to raise ours. But we can put pressure on American companies that seek to invest in Chinese factory farms. There was a recent case in which Britons, outraged by the force-feeding of ducks for foie gras, managed to convince a UK-based company to pull its investment from a major foie-gras facility planned in Jiangxi province.

We can also continue to demand improvements in how animals are treated in American factory farms, because a lot of U.S. pork is flowing to China. A recent report by the USDA states that exports to China are on the rise, with Mexico also a lucrative market.

My trip through China had nothing to do with animals — I practice Zen meditation and went with a group of other practitioners to visit ancient Zen temples. But during the long bus rides we took on China’s brand-new highways, we’d occasionally spot small trucks loaded with pigs bound for slaughter, and as they hurtled past us, I realized that farm animal issues follow us wherever we go.