On Superbowl Sunday: A nose-to-tailgate? 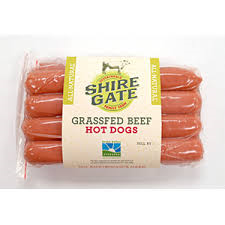 Better meat in sports stadiums… wouldn’t that be fabulous? You’d rise at the 7th inning stretch to go buy a humanely raised hot dog, bypassing all the factory farmed hot dogs and burgers that tend to send humaneitarians scurrying to the French fry line.

Encouragingly, humane meat has recently been available in at least one major sports stadium: Edward Jones Dome in St. Louis, which sells grass-fed beef hot dogs and burgers from Shire Gate Farm. That’s the farm owned by Will Witherspoon, a former St. Louis Rams linebacker (get the connection?) Shire Gate Farm is Animal Welfare Approved, and Witherspoon has said he sees “eye-to-eye” with AWA on how cattle should be raised. The farm partners he works with at Shire Gate are also AWA-approved.

While this is a welcome development, the fact remains that 40,000 factory farmed hot dogs were served at last year’s Super Bowl alone. So there’s a need for a lot more responsibly-sourced meat to be served in American stadiums (and not just in the VIP sections).

Slow Food USA has taken up the challenge with its Nationwide Nose-to-Tail Super Bowl Party, billed as “a day of action to draw attention to the need for better meat sourcing in sports arenas.” Americans are being invited to serve “better meat” at their Super Bowl Sunday parties next month. (“Nose-to-tail” refers to the philosophy of valuing all parts of an animal, not just the bacon or the chicken breast). 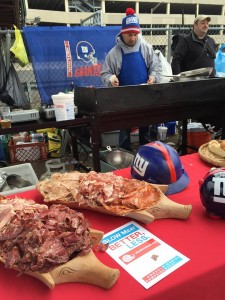 “If we can have a groundswell of sports fans — not just foodies but people interested in seeing a game, too — then we can tangibly show that there’s an interest in having better meat in stadiums,” says Megan Larmer of Slow Food USA.

Back in November, Slow Food hosted a kick-off tailgate in the parking lot of MetLife Stadium in New Jersey (where those 40,000 hot dogs were served at last year’s Super Bowl). Farmer Josiah Lockhart brought meat from one of his Mulefoot hogs (a heritage breed) and chefs cooked up some pork-based comfort food to warm the tailgaters.

“If you’re standing outside of a stadium eating wonderful food that’s part of American history and food traditions at sports events, then it draws attention to the kind of foods you want to see inside the stadium, as well,” says Megan from Slow Food.

So on February 1st, consider serving humanely raised meat at your Super Bowl Sunday party, or bring it to an event you attend. Snap a photo and send it to Slow Food and help other football fans realize what they’re missing.