A high school athlete fuels up on humanely raised meat 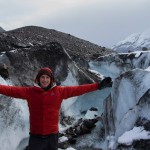 I was a vegetarian for almost a year before converting to pescetarianism last summer. After reading articles on food production in the U.S., I was horrified at the cruelty involved in the treatment of the animals, as well as the additives put into their bodies and into the meat we see everywhere in grocery stores.  I ate only wild seafood for about six months, and was very conscious of the sources of my food. I completely cut out red meat and poultry from my diet.

But it was very hard, as I often found myself craving grilled chicken at family dinners. At home, my parents were supportive and always tried to have options for me, but going out to eat with friends became a challenge. While at school, I could never find seafood that was up to my standards for animals, so I was basically vegetarian there. As a student athlete, I had to make drastic changes to other parts of my lifestyle in order to eat right, and it became a time consuming effort for me.

A few weeks ago I met a man who claimed to be a “humaneitarian,” and I was fascinated by his choice. Speaking with him opened my eyes to the fact that there are food producers who share my values, that I did not have to limit myself to fish to eat humanely. I realized that allowing myself to eat any type of meat — provided that it meets my ethical standards — would make it easier for me to eat correctly for sports as a 17-year-old athlete, and give me far more freedom at restaurants. I immediately became a convert.

I am still mostly vegetarian, as well-sourced meat is hard to come by on my budget, but I feel good knowing that I can support ethical farms and distributors. That being said, for the most part I enjoy eating vegetarian meals. The transition was rough, but I find that there is plenty of variety in just eating plants and grains. While I do cook most of my own meals, in time I hope more restaurants will provide humane options on their menus. With the support of fellow humaneitarians, hopefully the days of going out to eat and having to question the quality of the meat will one day be behind me.

Now I only eat grass-fed, pasture-raised, and cage-free meat (as well as wild seafood), but it’s not a sacrifice for me. The thought of eating a factory-produced hamburger has appalled me for years, and it is a joy to know that there are other people who care about the treatment of animals in this world. I found this website shortly after my decision, and it has been a fantastic resource for guidelines, news, and learning about other ways that people support animal welfare. Among my close friends I am the only humaneitarian (no vegetarians, either), but they have all supported me and applauded my efforts. Once I’m out of school I will continue my active support of ethical farming and push for stricter standards at restaurants. I look forward to working (and exchanging ideas) with other people who share these values.

Got a story to tell?  Write to Humaneitarian.