I usually buy humanely raised meat from sunburned farmers or hipster butchers — so the unique prospect of getting ethically raised cuts from a vending machine proved too irresistible.

I’d read about these vending machines in a Hudson Valley food magazine. My parents live in that region, so after visiting them in March, my partner and I drove to Accord, NY — home base of the Applestone Meat Company, a business launched by the same couple who founded (and have since sold) the uber-popular Fleischers Craft Butchery of Brooklyn and Kingston, NY.

The Applestone business is primarily a USDA-licensed meat processing facility. They buy whole animals from local farms and fashion them into cuts for sale to restaurants and shops. They also process livestock for local farmers who want to sell their own meat. 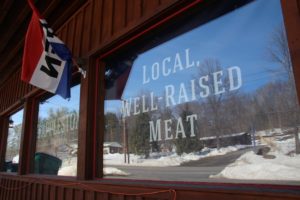 The three vending machines — located in a small, unpretentious room near the front office — were introduced a year ago to make it more convenient and affordable for locals to buy local meat. People who work from 9 to 5 often get off work after butcher shops are closed, but there in southern Ulster County, NY, they can visit the machines 24/7. So can people with lousy meal planning skills who forget to defrost meat from their freezer in the morning; all the meat in the Applestone machines is fresh, and ready to cook for dinner.

Prices at the vending machines tend to be slightly lower than for local meat in food co-ops and natural food stores because there’s no counter staff to pay, and little overhead for maintaining the machines. It’s part of Applestone’s ongoing effort to find creative ways to make local meat more affordable.

The vending machines were also conceived to meet the butcher’s needs. Joshua Applestone, company founder and head butcher, initially ran a counter when he opened the Accord facility in 2013, but he found it was challenging to serve customers in the front of the shop while also crafting hot dogs and pork chops in the back. 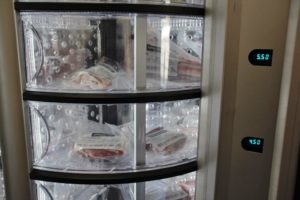 So, inspired by the old automats of New York City (which appear to be making a comeback), and aware that some people in Europe buy fresh food from vending machines (such as this one in Paris), Joshua retrofitted three machines originally designed to vend high school lunches. The machines don’t send the cuts of meat tumbling to an opening at the bottom. Instead, each package is stored in its own refrigerated compartment, which you slide open after you swipe your credit card and rotate the carousel to the package you want.

The vending machines have received a lot more traffic than the company expected. But I asked Samantha Gloffke, Applestone’s general manager, if something is lost when a real, live butcher is replaced by a machine.

“Yes,” she said. “We recognize that a butcher is kind of the spokesperson for this chain of supply. It’s a sacred thing to be able to defend that, and it’s not good if you lose that connection completely.”

So at the Accord facility, you can still knock on the door during business hours and get your questions answered. And at Applestone’s new flagship store in nearby Stone Ridge, NY, (which will include four vending machines) there will be an open window staffed by someone who can answer questions. 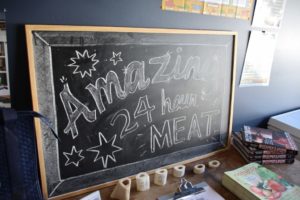 When I visited the Accord vending machines, I did have a question. There was no information in the room about where the meat was from or how it had been raised. The labels only indicated hormone- and antibiotic-free. Knowing the values and reputation of the Applestone company, I was pretty sure that all the meat had been humanely raised, but as all good humaneitarians know: never assume.

Samantha, the general manager, reassured me: all of Applestone’s meat is sourced from a farm in nearby Pine Plains and is pastured and primarily grass-fed (though not 100%, as the fermented silage on the farm includes some corn). The company is working on ways to convey this, either on its labels or near the vending machines.

I was also happy to hear Samantha describe the farmer in glowing terms that could never fit on a meat label. “He really loves his animals,” she said. “If he’s talking with you and there’s an animal suddenly in any distress, he’s no longer talking with you. He’s gone. It’s no longer about you.”

So my partner and I left Applestone with some ground beef in hand, but not before stopping at the old video arcade that Joshua Applestone had put in the same room with the vending machines. You can play a 1980s-era battleship game after buying your humanely raised meat, which makes the Applestone buying experience even more unique.