“Humanely raised”: the label to ignore 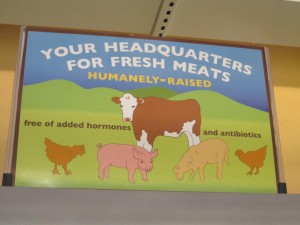 I spend my days urging meat eaters to choose humanely raised meat.  I encourage people to ask, “Is that humanely raised?” before buying an animal product. I invite folks to figure out what “humanely raised” means to them.

On food labels and signs, I mean. We can keep using it in our daily speech. But when you realize that “humanely raised” labels are slapped on meat, dairy and egg products raised in such vastly different ways — for example, on free-range chickens that frolicked on grasslands and on chickens raised indoors with no more space than the size of a piece of paper — you, too, might be skeptical of this label.

The core problem is this: our government has never legally defined “humanely raised” for the U.S. Department of Agriculture (USDA), which is charged with approving the use of food labels. This means the USDA has no clear standards by which to evaluate a company’s humane practices. When a producer asks permission to use “humanely raised” (or a derivative phrase, such as “raised in humane conditions”), it’s left to a USDA staff 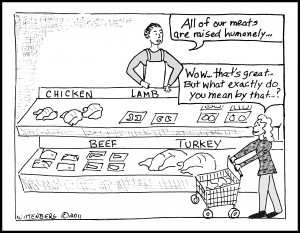 member at the Food Safety and Inspection Service (FSIS) to determine if the on-farm conditions described by the producer are “humane,” based on loosely written protocols that don’t really rise above industry standards. A farm’s conditions could be great, or they could be little better than that of a standard factory farm.

What’s more, food producers need only submit a paltry amount of information about their farming practices when applying to the USDA  for use of a humane claim. The USDA doesn’t visit any farms to see what’s actually going on — it depends solely on information from the producers, who of course, have a vested interest in getting their claim approved.

I’ve long suspected, as an ordinary consumer, that there’s no consistency in the use of “humanely raised” in the marketplace. A few pending lawsuits (you can read about them here and here) confirm that others are frustrated, too.

Now, an enlightening new report by the Animal Welfare Institute (AWI) explains why there’s such a vast range of companies using humane labels: there’s no clear definition of “humanely raised,” and the USDA is relying on very little information from companies to allow them to use a humane claim. 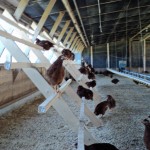 For its report, AWI filed Freedom of Information requests, hoping to review documents related to 25 “humane” or “sustainable” claims that were approved by the USDA. (Incredibly, the agency could locate documents for only 5 of the 25 claims.) It turns out that among the 5 claims AWI analyzed, one was from a company that provides outdoor access to its poultry, yet another was from a company that simply follows National Chicken Council guidelines, which are the industry standard, with no outdoor access.

Then there was AWI’s discovery that one of the 5 claims had been approved based only on a two-sentence affidavit supplied by the company; another was based on the animal care protocols of just one of the company’s many farms. The fact that producers need only submit a miniscule amount of evidence to the USDA to use such a complex label is just as critical an issue as the lack of a clear meaning of humane.

Should we, as consumers, ask the USDA (our USDA) to come up with a legal definition of “humanely raised” so it can have consistent meaning?  I’m not so sure. It took years for the government to legally define “organic” and “grass-fed,” and those were contentious processes that some feel watered down those labels. Also, “humane” is a much more subjective word, and it covers dozens of farming practices.

I asked Dena Jones, who wrote the AWI report and is the organization’s farm animal program manager, what she thinks should be done. She said ideally, the USDA would grant approval of the “humanely raised” label only to food producers who are certified by one of the four independent humane certifiers  in the U.S.: Certified Humane, Animal Welfare Approved, Global Animal Partnership (GAP), and American Humane Certified. (Note: Animal Welfare Approved is a program of AWI.)

If this were to happen, it would actually be easier for the USDA: staffers would simply need to verify that a producer has been certified by one of the four organizations, rather than sort through complicated protocols and submitted evidence. This solution would also allow farmers who practice truly humane agriculture to compete fairly in the marketplace, rather than struggle against companies that might make their humane conditions sound “better” than they actually are, while charging lower prices for their product.

To encourage the USDA to move in this direction, AWI is inviting people to sign an online letter to Secretary of Agriculture Tom Vilsack. You can read and sign the letter here. (More than 1,000 people already have, according to AWI.)

“Any scenario is an improvement over what the USDA is currently doing,” Dena Jones said. “Right now there’s no way for a consumer to look up their standards online; as we learned, you can’t even FOIA the records and find out. Only the producer knows what the claim means. We don’t think that’s acceptable for a claim that’s so valuable to consumers.”

So at the end of the day (or the end of your shopping trip), what’s a consumer to to?  Obviously, don’t buy meat with a  “humanely raised” label unless you know the company’s practices and are comfortable with them. A number of food companies are legitimately using “humane” or “humanely raised” (such as a few listed on Humaneitarian’s brands page), raising animals in a much more compassionate way than the industrial model.

As for what labels to rely on, humane certification labels give you the most information, and the certified organic label will tell you a lot about how the animals were raised, too.  But also look for the words grass-fed, free-range, and pasture-raised. There are issues with these labels, too (surprise!) — for example, no on-farm visits are required for USDA approval of these labels, either. But these labels refer to specific production practices that can offer a 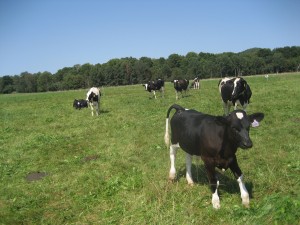 jumping off point for a consumer to find out more. And you know you won’t be getting standard factory-farmed meat if you buy products with these labels,  unless producers have flat-out lied to the USDA about the most basic facts of their on-farm set-up.

(You can bypass all these issues by purchasing directly from a farmer who you can talk to, or whose farm you can visit. Labels are never better than a conversation!)

We’ll have to see what the future holds for the precious phrase “humanely raised,” which shouldn’t be thrown around lightly. For now, though, let’s keep using it in our daily lives, remembering the core meaning of the word “humane” when it’s used in agriculture: giving the animals we raise for food a kind and compassionate life.