Humane highway: I-95 rest stop not a mirage 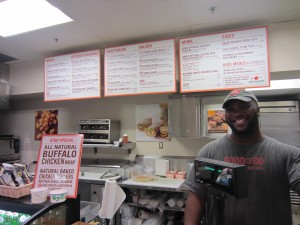 Why is this man smiling? He’s serving humanely raised meat at a highway rest stop!

As the tired masses yearning to breathe free — or just yearning to breathe some fresh air and get off the highway — staggered into the Milford, Connecticut rest stop along I-95 northbound recently, most of them headed towards the McDonald’s or the Sbarro, hungry lemmings about to jump off a cliff of grease, fat, and factory farmed meat.

But my friend Gerry and I, we knew better. We turned left and kept walking, towards a corner of the rest stop dining area where we’d been told we would find organic hot dogs made from pigs that got to go outside, and chicken sandwiches made from chickens that got to act like chickens.

We arrived at the counter of Good to Go and were greeted by the friendliest fast-food manager I’ve ever met, Shaun Rowe (pictured above). He told us that Good to Go  only serves meat from Applegate, a major company that sells organic and natural meats and prioritizes animal welfare. He also said there was beef chili on the menu made from grass-fed beef from Kinderhook Farm in Columbia County, NY. (It’s brought down to the rest stop by Good to Go’s owner, who owns a farm next to Kinderhook and leases pasture to the farm.)

We ordered the beef chili.  It was quite tasty. And as we did the seemingly impossible — ate antibiotic-free, humanely raised meat at an American highway rest stop — my friend pointed to the McDonald’s and said, “The only thing green over there is the money.” 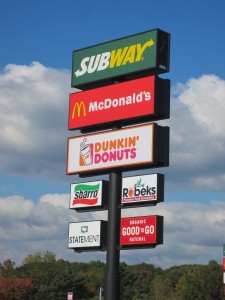 I’d heard about this oasis from a female trucker who wrote to Humaneitarian saying, “I don’t care how hungry I am, I will always wait until I get to this particular service plaza because I am comfortable with the Applegate brand being organic and humanely raised.” I’m glad she told me, because as you’re driving along I-95, it’s easy to miss the small “Good to Go” sign that’s sandwiched between all the other fast-food signs at that rest stop.

Good to Go — which has additional locations in midtown Manhattan and at another I-95 rest stop — is actually in the process of changing its name. Within a few months, the Milford rest stop location and the sandwich shop on E. 45th St. in New York City will both be called “Applegate Kitchens.” The company’s newest location, at a rest stop on I-95 southbound in Darien, Connecticut, opened this week and is already called Applegate Kitchens.

The identity change is happening because Good to Go’s owner, Andrew McDonnell, believes the Applegate name is well-known enough that it will attract customers. (His goal in starting Good to Go — initially as a hot dog cart in Central Park — was to bring quality meat to the masses.) McDonnell also wants to promote Applegate because he believes in how the company is raising meat. The fact that he’s the brother of Stephen McDonnell, founder and CEO of Applegate, probably has something to do with it, too. 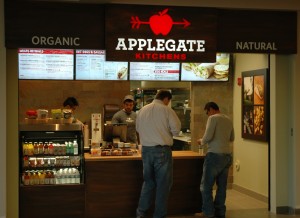 New name for the Good to Go chain

“My brother and I have been close for a long time, so we decided to join forces,” McDonnell told me in a phone interview, adding that Good to Go is not being sold to Applegate, they’re just licensing the name. “Plus, Applegate has a deep sense of raising the bar [in meat production] and these restaurants will help bring the brand to life and give it a feel and a texture.”

David Lowenstein, who managed the Milford location before becoming Good to Go’s regional manager, told me he estimates that 30% of rest stop customers in Milford have heard of Applegate. I’d be curious to know how many of them are aware that Applegate has two lines of products — organic and natural — and that animals are raised differently under those two production models. (At Good to Go, the hot dogs and sausages are organic, and the deli meats and chicken are natural.) 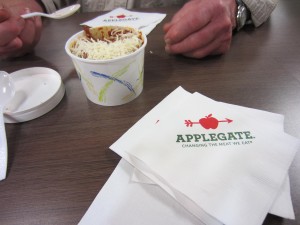 Lowenstein says he’s noticed something else about the customers at the rest stop.

“It’s the oasis effect, or the mirage effect: when people see us, they’re just so shocked that something like this is offered. It’s almost like they don’t believe it. They’ll ask, ‘Is this stuff really organic, really natural?’”

Yes, it is. Meaning the only mirage at the rest stop is the one my friend and I saw as we walked out of the building. We thought we saw solar panels attached to the overhang that protects the Mobil gas station pumps. Wait a second… those were real, too.

Keep up-to-date with the humane meat movement!  Sign up for our newsletter by scrolling to the bottom of this page.