Eating tip #3: How vegetables can make you a better humaneitarian 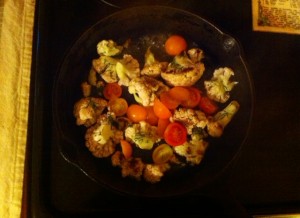 People’s number one complaint about humanely raised meat is its cost (followed closely, I’ve observed, by confusion about what is humane). And people’s most frequent health complaints (at least in the developed world) are about their weight, daily sluggishness, and a lack of adequate vitamins and minerals.

So it’s time to talk about vegetables — the simple, lowly vegetable — because, in a roundabout way, vegetables can make the humaneitarian way of meat eating more financially feasible, and can give our bodies more health and vitality.

Oh no, please. Not vegetables. They’re so bland, I don’t know how to prepare them, they don’t fill me up, I have to wash them, I don’t know what half of them are called, it’s easier for me to cook mac & cheese…

I get it—if this is how you feel about vegetables, know that I’ve ignored them for most of my life, too. At dinnertime I tend to wonder, “Should I make rice or potatoes tonight?” or “What meat should I cook with my rice or potatoes?” Vegetables are tossed in as an afterthought and act more like a garnish.

Yet it’s vegetables that can help us live a humaneitarian life – a life of ethical meat eating. Here’s the logic: humanely raised meat tends to be more expensive than standard grocery store meat, so most of us on a budget can’t eat very much of it. Which means we have to eat less meat if we want to choose humane meat. But if we don’t know what to eat on the days when we don’t eat humane meat, or we aren’t satisfied by our meatless meals, we aren’t going to be humaneitarians. We’ll stick with factory farmed meat because it’s cheap and allows us to eat meat every day. 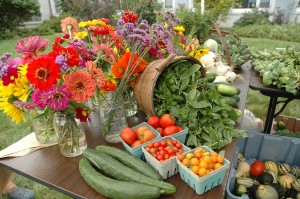 A pretty picture of vegetables on a website about meat!

If, however, we can make simple but kick-ass vegetable dishes, perhaps via the “vegetable pan” method, outlined below, we’ll be able to afford a humaneitarian lifestyle: we’ll eat meat from well-cared-for animals when we can afford it, and at other times we’ll eat (and enjoy) less expensive vegetables, prepared in simple ways that don’t require a lot of pricey ingredients or cooking knowledge, but taste great and boost our vitality.

Now, I’d like to tell you that vegetable dishes do not have to be fancy or complicated or require a recipe. I used to rely on cookbooks to prepare vegetables, instead of my own intuition and creativity, until this summer, when I visited my new beau. He is currently working on a farm where dinners are not provided, but free vegetables and a kitchen are. The vegetables he has access to are “seconds,” ones that are a bit ugly or damaged and which the farm cannot sell. He simply goes to the vegetable bins each evening and picks out the ones that appeal to him, throws them in a pan, stir-fries them in oil with some herbs, and eats the simple concoction for dinner, with some bread or potatoes. If he needs protein, he adds some damaged eggs from the farm’s chicken coop to what he calls his “vegetable pan,” or he tosses in some cheese.

After visiting him, I quickly became a convert to the vegetable pan approach, mainly because a vegetable pan doesn’t require a lot of thought. At the end of a work day, I don’t want to grocery shop or study a complex recipe – now I just throw together whatever vegetables are in my fridge (bought at the Saturday farmers’ market) in whatever combination that seems tasty, oil them in a pan, and add thyme, or sage, or chili peppers, or cilantro, or marjoram, or whatever is in my herb garden or pantry. I put a bit of plain rice on the side, perhaps doused with hot sauce or a dollop of pesto, or I go without starchy carbs for the evening.

Then I delight in having cooked something quickly and without the aid of an “expert” (cookbook author). I feel good about eating something so nourishing.

And when I tuck into my vegetable pan, sometimes I think about the next time I will sautee, roast, braise, or stew some of the humanely raised meat that’s in my freezer—meat that’s even more appealing to me now because I eat it less often, which is better for both my health and my food budget, virtually guaranteeing that I’ll be a humaneitarian long into the future (as if there was any question).