Holiday etiquette when you eat humanely 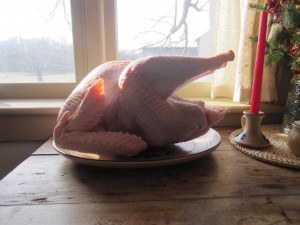 My local NPR station had a call-in show recently on “holiday etiquette,” complete with etiquette experts, so I posted a question for their guests to answer: “I try very hard to eat only humanely raised meat. Is it rude to ask a host where the meat came from or how it was raised?”

Before I tell you the responses of the two etiquette experts from the Emily Post Institute in Burlington, Vermont, I’m curious to know if you’ve ever been at someone’s house for a special meal, they were serving meat, and you really wanted to know where the meat came from before you ate it. Did you ask or stay silent?  Or maybe you’ll be attending a Thanksgiving meal this week without knowing in advance what kind of turkey will be served. What will you do when you get there?

My guess is that most meat eaters who try to make humane choices for the sake of animals would also try to be humane to their hosts: either they wouldn’t ask about the meat’s origins (to avoid seeming judgmental), or they’d ask casually (“Oh, where is that beautiful turkey from?”) and then decide whether to eat it, or decide whether to tell the host why they’re not eating it. I usually grin and bear it — or chew and bear it — when I’m served factory farmed meat by someone whose feelings I care about. (I also eat it because I don’t want that meat — that animal — to possibly go to waste.)

But Thanksgiving — a day when everyone’s attention is focused on a single species of bird — is a ripe occasion to start conversations about farming and humane practices, particularly if you’re eating with folks who don’t even know they have a choice in the meat they buy. Can humaneitarians come out of the closet on holidays like Thanksgiving and move this important conversation forward?

Here’s how the Vermont Edition guests responded to my query (you can listen to their answers here, starting at minute 20:45). “This is a case where the how [how you do it] can matter a lot,” said Daniel Post Senning. “Knowing who your audience is and how you ask the question will keep you out of an episode of ‘Portlandia‘ and in reasonable territory.” What I take from this is that if you’re posing the question to a friend who has an inkling that you prefer humanely raised meat, they may take it in better stride than an acquaintance who may be startled that anyone is interested in where the bird came from beyond which store it was bought in.

Asked by the radio interviewer whether you should tell a host in advance how you eat and offer to bring the meat dish yourself, Anna Post said no, it’s the host’s meal and the meat should be the host’s choice. But you can always inquire, she said. “If you ask before the meal, then if you’re not feeling comfortable about it, then maybe that’s the part of the dish that you skip as you go through the line… There’s no need to draw what could be seen as critical attention to it, since you are in someone else’s home and it is their choice. And often it’s a choice [they make] not just for ethical reasons, but also for budget reasons, so you don’t want to put them too much on the spot, especially if the choice has already been made.”

People who eat humanely raised meat out of a concern for animals are in a trickier spot than those with, say celiac disease or an allergy to peanuts. Our choice is moral, for the most part, meaning we won’t break out in hives if we eat factory farmed meat. We are more like ethical vegetarians, and we can certainly tell a white lie to our hosts in advance and just say we’re vegetarian, for the sake of simplicity. I have done that on occasion. But I also don’t like hiding who I am.

I’m fortunate enough to be attending Thanksgiving this year at the home of two humaneitarians — my parents — but if I were going to a stranger’s house, I might casually ask where the turkey came from, eat the turkey heartily — no matter where it came from — and, as the pumpkin pie was being brought out, I might say how wonderful the turkey tasted (to put the host at ease) and then mention casually, to those gathered, that I’m a humaneitarian. And then someone might ask with curiosity, “What’s a humaneitarian?”