Have you met the movement yet?

Reading a short history of veganism while traveling to a sustainable meat conference may seem like an odd thing to do, but trust me, it made sense. As I flew to Atlanta last week for the inaugural Southeastern Sustainable Livestock Conference, I gobbled up Erik Marcus’s excellent short history of the vegan movement and realized that the humane meat movement can learn a lot from America’s vegan and vegetarian pioneers.

Wait — the humane meat movement?  Few people may be calling it that at this early stage, but the seeds of it have been planted. It’s a movement comprised of ordinary Americans who are choosing to eat humanely raised meat & dairy, organizations that are certifying and promoting such products, and farmers who are raising them. And just as veganism grew slowly but steadily after it took root in the 1940s, the humane meat movement is growing slowly and steadily — like a healthy heritage-breed chicken! 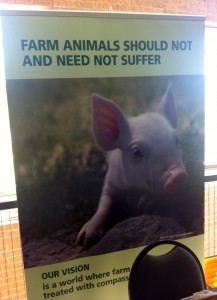 This is where the Atlanta conference comes in. Although geared towards Southern farmers and foodies, it included people from around the country who educate the public about humane animal products, so it felt like a gathering of many like-minded advocates. Three of them were Emmy Bernard of GoEO and Gillian March and Kate March of Vital Awareness. These women (who run organizations similar to Humaneitarian) have long been like rock stars to me, and I couldn’t pass up the chance to meet them!

Kate and Gillian organized the April 26th conference. They’re a dynamo mother-daughter team who visit and promote humane, sustainable farms in the Southeast. They’re tireless when it comes to getting the message out about ethical eating — and they were sleepless in the days leading up to their first conference, but it went off without a hitch! 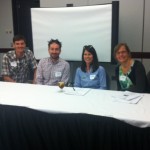 Our panel on understanding meat labels

About 130 people came — with all the spokes of the humane meat movement represented. There was Kate & Gillian, Emmy, and I, who run grassroots organizations that inspire meat eaters to eat ethically every day. There were some well-known representatives of animal welfare certification programs: Adele Douglass, founder of Certified Humane; Carrie Balkcom of the American Grassfed Association; and Emily Lancaster of Animal Welfare Approved. On the policy and research end of things, there was Daisy Freund of the ASPCA, and Leah Garces and Rachel Dreskin of Compassion in World Farming USA, and Eric Swafford of the Humane Society of the U.S./Rural Outreach, and Patty Lovera of Food & Water Watch.

Plus there were fabulous farmers (like Will Harris of White Oak Pastures), chefs and butchers (like Rusty Bowers of Pine Street Market), retailers (Whole Foods VP Edmund LaMacchia gave the evening keynote) and consumers (like Kristin Hanson, who runs the wonderful blog Atlanta Ethical Eats). 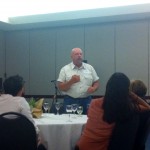 The inspiring farmer Will Harris of White Oak Pastures

By the time the pork sliders and collard greens from Farm Burger were served for lunch (you’ll always eat well at a sustainable meat conference!), folks were saying that even though the panel discussions were interesting, just getting to mingle with such an array of agriculturists was super beneficial. And by the time the bluegrass band kicked up after dinner, new friendships had been made.

So even though the conference was small, it was diverse and whole. It was representative of all the good work being done to create a compassionate, sustainable food supply and better lives for farm animals. Call me sentimental, but being with all those folks in one place made me feel encouraged that our movement is gaining strength, crystallizing, and building on all the amazing work that has been done so far.

“We’re in a new era,” Edmund LaMacchia of Whole Foods said in his keynote speech. “We’ve reached the apex of concentrated industrial food production. The fun is just beginning.”