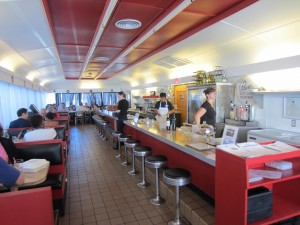 I usually walk into a restaurant preparing for a friendly but awkward interrogation of the waitstaff.  I know I’ll be asking them where the chicken came from, if the beef was 100% grass-fed, how the pigs were raised… and usually they’ll have to go ask the chef. Once, my questions sent a poor waitress back to the kitchen three times!  When I apologized, she said, “No worries, I’m a vegetarian, I totally understand.”

No such worries at Grazin’, a diner in Hudson, New York. The waitress beat me to it — told me all I needed to know about the meat before I even glanced at the menu. And what she told me was heavenly: that all the protein served at the diner (meat, milk, cheese, and eggs) came from farms that are Animal Welfare Approved. This means all the farms providing the diner with animal products were certified by one of the country’s top humane certification organizations. AWA is the only humane certifier that requires the pasturing of animals, and Grazin’ is the first all-AWA restaurant. 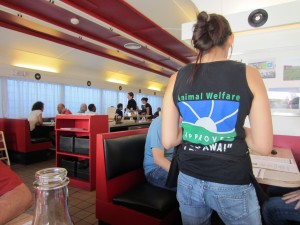 (By the way, it’s impossible to forget the name of the organization during your meal. Just look at the sweet t-shirts worn by all the servers, which proudly state “I am Animal Welfare Approved!”)

The burgers at Grazin’ are made from 100% grass-fed beef raised up the road (by the diner’s owner, in fact — he’s a farmer). The eggs and pork are from there, too. The biodynamic Hawthorne Valley Farm provides raw-milk cheddar and buttermilk. Other cheeses are from Consider Bardwell Farm and Prodigal Farm. To top it all off, the produce is local and seasonal, and the coffee is shade-grown.

“Meadowy,” one my fellow diners said when I asked what her burger tasted like. We agreed that this new addition to the lexicon of taste — the word “meadowy” — was hard to define yet impossible to surpass. Eating the diner’s grass-fed beef was as close as I’ll ever come to getting down on all fours and munching on fresh meadow grass. (It’s easy to be jealous of pasture-raised cows sometimes…) The flavor was clean and earthy and distinct, even though the particular burger I ordered was slathered with jalapeno relish.

How wonderful that a plain old diner can serve such great meat. So often people associate humanely raised meat with expensive restaurants — and for good reason: humanely raised meat is more costly to produce. (Treat animals like plastic widgets and you can make them cheap; treat them like animals and there are more labor and material costs involved.) Responding to consumer demand, the marketplace is only now beginning to figure out how to produce humanely raised meat at more competitive prices (though I doubt it will ever be as cheap as factory farmed meat).

Indeed, in Vermont, where I live, you can now find a lot of pub food made with humanely raised beef and pork: burgers, bangers, BLT’s… Eating at Grazin’ actually brought back fond memories of the Farmers’ Diner, which opened in 2002 in central Vermont and made a valiant attempt at serving diner food that was sourced locally and reasonably priced. 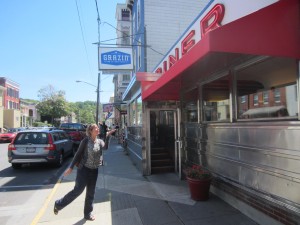 Blowing a wish of good luck to Grazin’.

It didn’t succeed, but I’m hoping Grazin’ will. It’s located in a picturesque town by the Hudson River that’s anchored by a hip, upscale main street and surrounded by gorgeous New York farms. Make your way there and do some grazin’.