Farming, weeks 6 to 9: Where the boys are 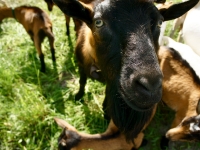 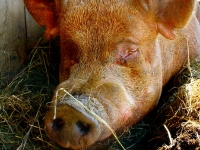 I’m talking about the male animals at Green Mountain Girls Farm, where I’m working this summer. Capturing my heart right now are Boris, a male goat, and Gellert, a male pig. Encircled by females of their own species (which must drive them a little nuts), they are lone rangers in a wild west of women whom they might eventually breed. Boris is a swarthy, stinky type, with a black icicle of a beard and tiny exposed teeth — his bottom lip doesn’t quite cover them. Gellert is a sweet, lumpy fellow — the biggest pig you may ever see — whose gigantic pouches housing his “crown jewels” are visible to all who visit. Boris bred the white & dainty female goats Wangari and Worldbeat, who are due to give birth to baby meat goats soon; Gellert bred the sow Checkers, who birthed seven healthy piglets in April.

Perhaps I fell in love with Gellert while watching him, week after week, pine after his little ones and their mama on the other side of the wire fence in the barn. A doting male, he had to be separated from them to keep him from accidentally stepping on the piglets or impregnanting the sow at a time inconvenient for the farmers. But I could tell that proximity was not enough for Gellert: this was a long-distance relationship, over a fence. Interestingly, after the piglets were moved out of the barn and Checkers went out to pasture, Gellert seemed more at ease. He wasn’t reminded of what he couldn’t reach. 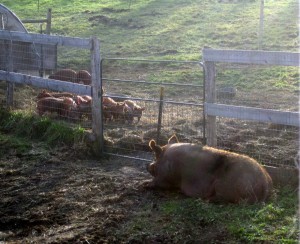 Boris is more mercurial, doesn’t wear his emotions on his sleeve — er, hoof.  He is quiet, polite, and seemingly secure in his own skin. (Yes, I think humans can discern an animal’s personality — if we can do it with dogs, why not other animals?) Boris, I like to think, is dignified. But man, does he smell. Like really putrid goat cheese — it happens with male goats. Then again, he is a goat, and if you’re going to smell like cheese, better smell like the kind your sistahs help make. 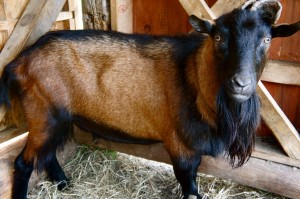 My sentimentality for Boris and Gellert might stem less from their personalities than from my awareness of this simple fact: in industrial animal agriculture, males are generally unwanted. They’re necessary for breeding, but consider the following: most male dairy calves — after being born and stimulating their mamas to give us milk — are sold for industrial veal or processed for beef broth at a very young age; male chicks born in hatcheries that supply farms with female hens for egg laying are killed right in the hatcheries because industrial agriculture can find no use for them. My research on males in animal agriculture is only in its infancy, but the issue of what to do with these perfectly healthy animals and how to humanely raise them as a source of protein is an essential question.

Of course, female animals in factory farms don’t have it so great, either. They are the workhorses of our meals, birthing and birthing and birthing and birthing to create the offspring that becomes our meat, and the sows and egg-laying hens are often kept in the most miniscule of cages. There certainly is gender parity in industrial agriculture: everyone gets the short end of a very short stick. Fortunately, on small-scale farms such as Green Mountain Girls, females are given more of a break between gestation cycles, and slowly more dairy farms are keeping bull calves and raising them for pastured veal.

I can definitely say that the boys at Green Mountain Girls Farm are very much wanted, and showered with love by all who work there. While doing all sorts of chores over the past few weeks — giving selenium shots to baby goats, clearing out a winter’s worth of bedded pack from the hoop house, putting up new pasture fencing, cleaning out buckets — I’ve stolen many a glance at Boris, and rustled Gellert’s ear whenever I feed him. I like to think it makes them feel respected. They’re probably just wondering when the females will go into heat.