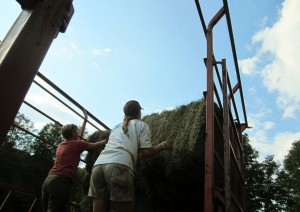 I hollered it. No need, really, as all of us working on the farm that day knew the hay delivery was imminent. We were chatting with customers at the farm stand — one ear on them, the other listening for the hay truck — and when I heard it finally arrive, I yelled excitedly to Mari, Laura, and the rest of the crew at Green Mountain Girls Farm because during my three summer farm jobs I’d never handled a hay delivery before, and the prospect of tossing bales held a certain mystique. (That’s farm work.)

The bales — 175 of them — were tucked onto a flat-bed trailer driven by a local fellow who began teasing all of us good-naturedly as soon as he stepped out of his truck. (Native Vermonters will rib you mercilessly if they like and respect you.) We decided that he and Mike would go up to the hay loft to stack, while Mari and Lauren would throw bales off the truck and I’d lift them onto the conveyor belt that would crank them up to the loft.

As each bale bounced towards me (they probably weighed 40 pounds each), it got dustier and dustier inside the small barn. Little flecks of grass began to lodge in my throat and eventually (it seemed) my lungs. I thought of my dad, who developed asthma during the few years that he and my mom ran a small hay operation on their country property. (I was too young to help with the haying back then.) Three decades later, there I was working bales in honor of my dad. As I braced them against my right shin, grabbed the two strands of twine, and worked my abs to the delight of any Pilates instructor, I knew I should have worn a face mask. But I didn’t want to stop the flow of our work. Like the others, I wanted to “git ‘er done.” 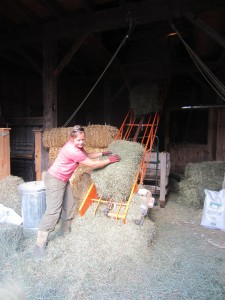 What allowed us to git ‘er done without massive exhaustion and serious damage to our limbs was the conveyor belt. As it clanked and lumbered, I looked at it with love, adoration, devotion. Who does that?  A person who is viscerally reminded that even though the near total mechanization of American agriculture has led to some rotten developments for animals, the environment, and farm workers, it has saved countless farmers the kind of physical wear and tear that used to take their lives by age 40, or make for a miserable old age.

Speaking of wear and tear, what a rough summer it’s been. I’m here to tell you that farming is really, really hard. On this small, hands-on farm, I am constantly in motion from 8 am to 6 pm, helping the crew finish all the work that needs to get done in a day. I lift and carry heavy grain bags and water buckets, haul carts up hillsides in the noonday sun, sweat in hot greenhouses, pull with all my strength on ropes attached to stubborn animals, hand-milk the goats with steadily aching fingers. Even though I work at Green Mountain Girls just one day a week,  I feel the effects of the farm work in my hands, legs and feet throughout the rest of the week. (If I worked there every day, perhaps my body would adjust.) Physical issues that rarely cause me trouble at my writing desk flare up every day I work on a farm.

As a result of the challenging jobs I’ve done during my three farm internships, I often wonder, worry, and wish the following:

After we got all the hay in the barn, I did some evening chores and was all set to head home when another 75 bales showed up. The same teasing Vermonter got out of the truck and teased me about not going home quite yet. (More sweat and dust in my eyes, more flecks of dried grass in my bra… but you couldn’t have paid me to leave before the job was done.)

It was done pretty quick, and before I went home I ran into co-farmer Laura as she was checking on some fencing. She told me that for her, the early fall hay delivery brings a great sense of relief. “People talk a lot about food security,” she said, “but for me, it’s about hay security.” She knows there’s enough nourishment in the barn to take her animals through the winter, to next year’s spring pasture. In this changing world, where not even the weather is secure anymore, I’m sure everyone who gets sustenance from this farm would feel pretty good about the hay delivery, too.