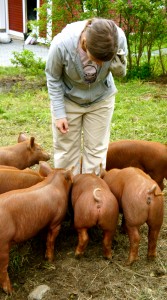 It was going to be one of those mornings — not when everything goes wrong, but when you can’t seem to do anything right. I opened a bag of chicken feed from the bottom instead of the top. I (still) couldn’t figure out how to fasten the intricate straps and buckles that keep the dairy goats fastened to their milking stand. I couldn’t find jugs, buckets or molasses jars, even though they were right under my nose. As I filled the poultry waterer, I forgot to place the cap on the spout — and was briefly unaware that the thing was emptying from the bottom as I filled it from the top.

You need three things to farm: a farmer’s body, a farmer’s mind, and a farmer’s heart. I know I have the heart. I have the body (on good days). My mind can be questionable. It’s not a very mechanical mind, and it can’t hold too much information unless that information is written down. My farm chores always get done, and get done well — I am a responsible employee — but I get there via a lot of frustration with my own mind, and sometimes a few tears. On days when this gets to me, I can easily blame the fact that I’m a woman — just not mechanical, just not good with my hands. Right?

It was such a day last week, and I trudged back down the hill after morning chores, questioning whether I should ever keep farm animals myself. But soon it was time for lunch. Farmer lunch.  Or I should say, Farmer Lunch — with capital letters — because at Green Mountain Girls Farm, when the farmers and farm apprentices gather for lunch, it can be a memorable event, even though it’s a daily occurrence.

As I wrote in my current editor’s note for Vermont’s Local Banquet, we eat whatever is in Mari and Laura’s fridge or on the “farmer shelf” in the walk-in cooler — primarily what comes from the land we’ve just worked. And not the best of it but the bruised, overripe, bitter, funny lookin’ things that can’t be sold. And whoever is on lunch duty gets to prepare those things in a creative way — i.e., a way that won’t cause everyone else to think, “Not chard and salsa agaaaaain…”  And no one ever does think that way, because we have an amazingly inspired team when it comes to cooking: we sit around and marvel at what Lauren does with green tomatoes and cilantro, or what Mari does with rice and fennel.

At this past week’s lunch, we were joined by three women who were doing some permaculture landscaping on the property. Along with them and me, there were three apprentices (all women), the produce manager (a woman), a neighbor (a woman), and Mari and Laura (two women, together for 15 years). We were 11 women gathered at one long table. Even though I work weekly with an all-women crew, and Mari and Laura named the farm after the legendary Green Mountain Boys but with a gender twist, at this lunch it really struck me that I was part of a truly women-run farm.

At one point, someone asked Mari to tell the tale of when the trailer broke down on the way to the slaughterhouse, and she and Mary, a farm apprentice, had to handle a tough situation with a huge sow in the trailer. When state troopers showed up to help, one of them literally removed a drill from Mary’s hands as she was using it — apparently believing she would hurt herself. “And Mary’s tough as nails,” Mari said. “Of all the people you don’t need to remove a drill from!”

Then Laura mentioned a neighbor — a fellow — who stopped by soon after the farm was launched. “So… what’re you gonna do with those pigs?”  he asked the couple. Our table of women burst out laughing. “Uh, braid their hair?” Lauren joked.  “Yeah, um… train them to be mascots for Northfield Savings Bank?”  Laura wondered. We were tickled by the old-timer’s inability to comprehend that the pigs would be raised for food by these two women who had taught themselves very well how to farm, thankyouverymuch!

I normally don’t like to make too big a deal of women doing certain things — women farming, women driving tractor trailers across the country, women running for president. This implies that they overcame physical, mental or emotional hurdles, when in reality all they had to overcome were cultural ones. Yet I can’t help but notice that when it comes to the humane raising of farm animals, women seem to be at the epicenter of this growing movement. There’s Temple Grandin, the most prominent spokesperson for the cause. Three or four websites similar to Humaneitarian are run by women, as is this one. Women run most of the pasture programs I’ve come across. And by far, it’s been mostly women who have ‘liked’ Humaneitarian on Facebook.

Not that men aren’t interested in humane issues, or can’t contribute to this field. But my highly unscientific observations make me wonder why it’s women who are contributing so deeply to this cause, and whether that offers any insight into where the movement is heading, or where it’s been.

After Farmer Lunch last week, surrounded and inspired by highly competent women, I didn’t feel so badly about my mechanically-challenged mind. The fact that I have such a mind has nothing to do with being a woman; it probably means I haven’t used that part of my brain very much. Let me keep training it. One day, I’d love it if an old-timer drove by my land as I was fixing my tractor, and asked me what I was going to do with that tractor.