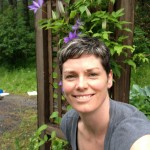 I first became aware of the conditions most food animals live in (in the US) as a veterinary student.  In our first year, we had a thought-provoking class aimed at raising our awareness about our own and others’ attitudes toward animals, and we learned to challenge our assumptions and conditioning about how animals think and feel, and how we see and treat them.  Among the books that inspired me was Peter Singer’s Animal Liberation.

I decided that I didn’t think it was wrong that people ate animal products, but I felt that if we were going to eat other animals, we owed them a comfortable life and a quick and relatively painless death.  Humanely raised animal products were hard to find in the Boston area at the time.  I became a vegetarian during vet school.  I stopped eating meat, but continued to eat eggs and dairy products.

As I spent more and more time with dairy cows, I realized than most dairy cows (and laying hens) led lives that were far worse than those of beef cattle.  I decided that being a vegetarian dairy vet was absurd, and in order to live my convictions, I would have to become a vegan, or give it all up as an exercise in hypocrisy.  So I started eating meat again.

At around the same time I realized that while I loved working with cows, I was disillusioned about participating in and supporting (as a veterinarian) the US dairy industry which generally treats cows as disposable, and sacrifices their health and well-being in the name of more milk, all the while twilight-zone-ishly claiming that they must be healthy and happy, for if they weren’t, they would stop producing.

I moved to Vermont and became a small-animal veterinarian.  At the same time I began actively seeking out more sources of humanely raised animal products.  I now eat paleo/primal, which involves a fair bit of meat– almost all of which is organic, grass-fed, and raised by terrific caring farmers whom I have actually met, and whose farm I have visited.  I am so delighted to live in Vermont where so many farmers care about the lives their animals live.  They understand that we are stewards of these animals, and that they are not just so many “units.”