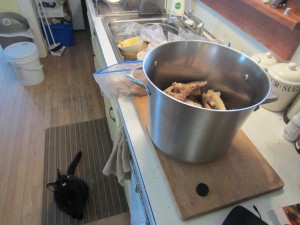 A key rule of making stock: keep your cat far, far away.

A few weeks ago I stood in my mother’s kitchen, determined to make use of the entire animal that was momentarily to become our Christmas turkey. I was going to put every part of it to good use — every bone and sinew and muscle of it — not just because this precious bird had nestled and cooed in my hand when it was a wee babe, or because I’d rescued it (along with its flock-mates) when a sudden August thunderstorm flared up during my summer farm internship, or because I’d plucked its feathers on the farm’s slaughter day, helping to close the circle of its life.

It wasn’t just ’cause I had a relationship with this bird that I wanted to cook every part of the thing. It was also because that’s what humaneitarians do: appreciate and value farm animals by eating (almost) every part of them when there’s an opportunity to do so. No way were those bones going straight into the trash.

So I “took stock” of the situation, and decided to make my very first turkey stock. Actually, my first stock ever. (Secret: although I run a website about meat and edit a magazine about local food, I’m not a foodie, and have only recently discovered the joys of whole-bird cooking.) As I prepared to hit the road post-holiday, my mom threw the leg bones, wings, carcass, and scraps of skin, fat, and dark meat into Ziploc bags and probably wondered why I was going to all the trouble.

Turns out making stock is super easy, and you’re left with numerous containers of flavorful liquid to use in soups, stews, and sauces. Also, stock can be expensive if bought in stores — making it yourself costs only a few dollars for the celery, carrots, parsley and onions. Here’s one way to do it!  (I invite you to post your own stock recipes below.) 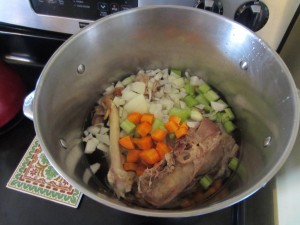 1. I used the recipe from Nourishing Traditions, by Sally Fallon – a book that extols the traditional virtues of animal fats, dairy products and fermented foods. All the parts of my dear turkey that we didn’t eat at Christmas were thrown into this pot. I added water to cover, a bit of apple cider vinegar, an onion, a bunch of parsley, and a few celery sticks and carrots. 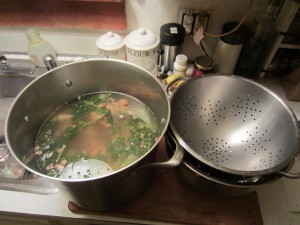 2. After letting the stock stand for an hour (while I shoveled snow — a completely meaningless detail, except to convey the fact that making stock is a soothing, cozy thing to do on a cold winter day), I brought it to a boil, then simmered it for  7 or 8 hours. (I could have simmered it longer but needed to get to sleep.)  This is what it looked like after simmering was done – the parsley had been added 10 minutes before I took it off the stove. 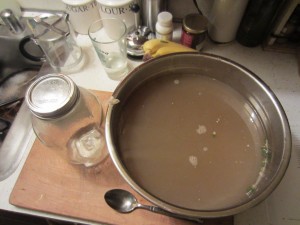 3. The whole pot was poured through a strainer, and it looked like this. At this point I could throw the turkey bones away, knowing I’d gotten full value from the animal. I gave my cat some pieces of stray meat that had slipped off during cooking – but no bones! 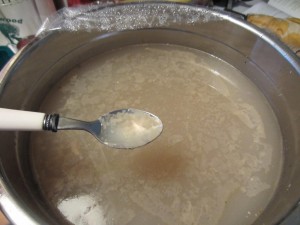 4. Next morning when I removed my big bowl of stock from the fridge, I noticed that this fatty scum (for wont of a better word) had risen to the top. But Sally Fallon had predicted it, even instructed the reader of her recipe to wait for it to congeal in the fridge before putting it in containers. Removed it I did. 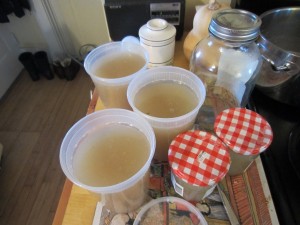 5. I ended up with about 4 quarts of turkey stock, which I put in my freezer. (In the fridge it lasts only a few days.) And the difference between stock and broth?  Broth is made with the meat, not just the bones, of the animal, and tends to be more flavorful. Stock doesn’t have salt, either, so don’t expect it to taste like good chicken soup. But the two can be used interchangeably in recipes.

By the way, next time someone says that buying a whole pasture-raised turkey or free-range chicken is “too expensive,” ask how much they spend on canned stock from the supermarket!