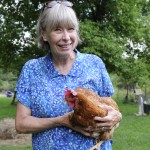 My transformation from “Carefree Carnivore” to “Humaneitarian-With-Vegan-Tendencies” began 25 years ago, when I accepted a job as the education & outreach coordinator for a small Vermont humane society.  To educate myself, I read literature put out by several national humane organizations. Along with articles about spaying, neutering and pet care, there were articles that described the inhumane ways animals are treated on factory farms.

My first reaction was, “Who are they trying to kid? Farmers wouldn’t treat animals like that!” But then I thought, “What if they’re right?” I wanted to see for myself. Gradually, through job connections and my own snoopiness, I was able to visit places like the ones I had read about: a factory egg farm, a veal farm, a confinement hog farm and others. What I saw shocked me. Everything in the magazines was true. They weren’t exaggerating!  After one particularly bad experience at a cattle auction, I vowed never to buy meat again unless I knew it was from a farm where the animals were humanely raised.

But that meant… what? I didn’t know where to get humanely raised meat or eggs. (Remember, this was 25 years ago, before humanely raised products were as widely available as they are now). My knee-jerk response was to venture into vegetarianism with sometimes great, sometimes comical results. “Eewww, Mom!! Even the dog won’t eat this meatless meatloaf!” said my daughter.  I began asking around and finally found someone with chickens who was willing to sell me eggs if I drove to her house. Then word of mouth led me to someone who sold meat chickens she raised in her backyard.  Chicken soup and omelettes were back on the menu.  But there was still the question of what to do in restaurants. I began politely asking wait staff if they knew where the meat on the menu came from. Not surprisingly they never knew, and would look at me like I might start screaming about the end of the world. My daughter would hide behind her menu and say, “Mom, don’t ask stuff like that… just order and be quiet!”

All this is to say, switching to humanely-raised meat was not quick or easy for me, and it’s a transformation that’s not over yet. But over the past 25 years it has gotten a LOT easier!  So much that I no longer buy any factory farmed meat. The only time I eat it is if it’s served to me at someone’s house.  If there’s a way to avoid it, I do, but if they serve it to me on a plate, I eat it.

The easiest place for me to buy humanely raised products is my local food co-op. It carries both locally raised beef, pork and sometimes lamb, as well as meats from more distant farms that are labeled “Certified Humane” or “Animal Welfare Approved.” They carry eggs, too, but some are from a local factory farm. I avoid those. Another thing I do is purchase directly from a farm.  The one I buy from is L&L Terrier Farm in Cornwall, Vermont. They operate much like all the others I’ve visited: they are open 24/7 and have a small building with a freezer full of various cuts of meat.  You just go in and pick out what you want and leave the money in a can on a shelf next to the freezer. Each package is marked, the prices are great (ground beef is $3.00 a pound) and it’s so good!

Even though I feel good about buying meat and eggs that are humanely raised, I should mention that one of the many positive things about this whole transformation has been that I’ve learned to love vegetarian and vegan meals. We now eat them about as often as we eat meals with meat. I have also begun using almond milk instead of cow’s milk for some things because of my concern for all the “useless” male animals that are killed shortly after birth so humans can have the milk intended for the calves. (It feels sad writing that, but it’s the way the dairy industry works.)

Once you’re aware of the issues and know that solutions exist, probably the most difficult thing is simply taking the time to make the changes. (It’s taken me 25 years and I’m still working on it!)  But I can say that becoming a humaneitarian (or a vegetarian, a vegan, or however one chooses to honor and respect animals) is well worth the effort it takes. Here’s some obvious advice. Start small. Talk to people and ask questions. Stick with the things that work. Keep learning. Read this website.  And whenever you have a chance, take time to stop and look at farm animals. Observe what they’re doing. Look into their eyes. Touch them if you can (and if they’re agreeable). And remember to say thank you!