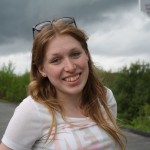 I’m really glad that I’ve become a humaneitarian. I’m 18 years old and I’ve been eating this way for about a year and a half now.

When I lived in New Hampshire, I wasn’t very concerned about the meat that was brought home. If it was meat, and something I liked, I was willing to eat it. I was like that until my sophomore year in high school, when in my health class we watched the documentary Food Inc., which completely informed me about the disgusting and awful things that were happening to animals in factory farms. I stopped eating meat for a long time, and I began to inform my friends and family about how some farms were treating animals. Not many people cared. I tried and continued to spread the new information I learned.

In February of 2012, I moved to Vermont. I didn’t realize how the state was mostly into agriculture. That’s when I started to pursue eating humanely: I knew it was going to be possible. I told my family and friends about it — they thought it was a hassle to go find humane meat, it was too expensive, or they thought, “Meat is meat, it shouldn’t matter how it was treated beforehand.” That mentality disgusted me. Some friends got mad at me for the way I thought about meat. Others totally agreed, and did the same as me or are vegetarians. The fact that I wasn’t alone on this subject made me feel better. I’m glad my friends care, or want to be informed — it’s a great feeling.

I’m very pleased with my decision. I may be 18, but you’re never too young or old to make your decision to become a humanetarian.

If you want to eat humanely, you should!  It’s sometimes difficult to find humanely raised meat, but I say be patient, because you will find it and it’ll be the greatest feeling! Always make sure to look at the labels, and read what it says on the packaging — most of the time when you look for humanely raised meat, it’ll say clearly and in big font “free-range” or “grass-fed.”

Some advice I used while in the process: Be patient and look for what you really want, don’t settle for just any meat. I know that at get-togethers, BBQ’s, etc., it’ll be hard, unless you know that the event you’re going to will serve humanely raised meat. If not, make sure to ask what kinda meat they’re using. If it’s not humanely raised, politely decline. It may be hard, but stick to other foods they serve, like pasta salad, or if they ask you to bring your own meat next time, then you should. Also, if you’re out at the mall, or at a food court, or at a concert, always stick to non-meat foods — most of the time their meat isn’t humane or they don’t know where the meat came from.

Be informed. As I mentioned, always look at the label or for a certain brand you trust. The brand my family gets from the supermarket is called Full Circle. Also read articles, and websites like this one — they’ll help you out in the long run so you can know what brands to look for and what brands to steer clear of.

No matter what age you are — whether you’re 18 like me, or you’re younger than 18 or older than 18 — don’t let other people make you think negatively think about your decision. I always have people say, “Oh, you’re only 18, you’re young. You don’t really know what’s going on. Your decision is dumb and a waste of time.” Or this is said often to me: “Eating humanely raised meat isn’t going to change the world or the meat industry.” Whether it does or doesn’t, I’ll continue to stand strongly next to my decision. And you should, too. You’ll benefit from becoming a humaneitarian! And it’s a great feeling!