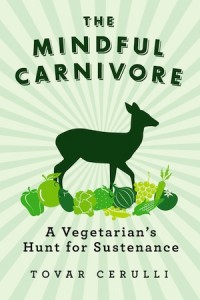 Lately I have been hearing and reading a lot about the “local food movement,” or the push to eat more food produced locally, as well as being more aware of where your food comes from. I’m always surprised to see that meat which is harvested, or hunted, is almost never included in this discussion. How much more local can meat hunted in your backyard get? The hunted animal has never seen the inside of a cage or been force-fed antibiotics, and most hunters aim for the clean kill, which is probably more humane than many methods used in factory farms. These animals have lived their life in the most natural way possible, so why is hunting rarely included in efforts to eat locally?

That said, recently I have seen the topic of hunting pop up more often, as more people find themselves in the moral struggle of whether or not to eat meat. When I was asked to review Tovar Cerulli’s The Mindful Carnivore: A Vegetarian’s Hunt for Sustenance (Pegasus, 2012), I was excited to delve into a new book that I hoped would give another perspective on the world of hunting, as well as the world of mindful eating.

Coming from a family of hunters and being an aspiring hunter myself, I was immediately drawn in by Tovar’s personal struggle between vegetarianism and hunting. I, too, have struggled with the accountability of eating meat, but have always said I would rather eat something hunted than something from a factory farm. While I find myself strongly on the hunting side as opposed to the vegetarian side, I wanted to read this book with an open mind. As I sat down to begin it, I momentarily glanced up at the more than 12 mounts ranging from deer to goose hanging on our living room walls, and decided to read in the bedroom.

Tovar begins the book with memories of his childhood and fishing with his father’s friend Willie. He speaks of fishing to eat, not just for sport, although he enjoys the thrill of the catch. As Tovar gets older and he hones his skills, he also begins to catch frogs and other larger animals (which he also eats). “To me, killing fish wasn’t so different from picking wild blueberries. Both were edible parts of the world, free for the catching or gathering.”

As Tovar grows older, his moments of what he refers to as “carefree carnivory” become less and less, and during college he chooses a life of veganism. He explains that his transition was fueled by multiple components, the initial decrease due to wanting to be healthier, which then led to thoroughly examining his rationale behind eating any animal products. After attending a Buddhist retreat and finding himself at a life or death moment with a trout, he decides to refrain from eating any animal products. (While I personally applaud anyone who chooses to live this way, I myself could not live without cheese, preferably on top of my hamburger.)

His diet makes another change later in his life, when he and his wife decide to re-introduce meat, mainly for health reasons. At this point he decides to hunt this meat himself. And his trek into the world of hunting is enlightening and humorous. He has a way of making you feel like you’re making the transition with him, from his embarrassment over his lack of knowledge about guns to his requests of people to hunt on their unposted land. “Landowners who had grown up here were baffled by my question. Their land wasn’t posted. Didn’t I know that meant I could hunt it? I did. But asking was still good manners.”

The book then delves deeply into the neverending argument between vegetarians and hunters in a tasteful and informative manner, resulting in a request to be mindful of what you eat, whether it be hunted, raised, manufactured or grown. While providing his own personal accounts to support his beliefs, he also provides a wealth of information on the history of New England and the importance of hunting to conservation. While some of the sections that are filled with scientific and historical facts read slower than his personal accounts, the book overall is a great read for anyone who has questioned the accountability or rightfulness of hunting themselves. Included is a quote from Aldo Leopold that I have seen quoted in numerous books, including the New Hampshire hunter’s education course manual, and that I feel explains the accountability of hunting: “A peculiar virtue in wildlife ethics is that the hunter ordinarily has no gallery to applaud or disapprove of his conduct. Whatever his acts, they are dictated by his own conscience, rather than by a mob of onlookers.”

A place were I really resonated with the author came in the epilogue, where he discusses the feeling he has year after year after the kill. I have to admit that while I firmly believe that hunting is necessary to the conservation and sustainability of an ecosystem, and I consider myself an aspiring hunter, I have yet to make my “first kill.” I’m not entirely sure what feelings will come up during that moment in the woods, sitting against a tree or up in a tree stand, when I pull the trigger, but I do know that I will feel much more justified enjoying that steak than anything I could buy in the grocery store.

Tovar’s journey, while showing both sides of a challenging issue, has solidified my belief that hunting is ethical and necessary. His book is a great read for anyone — those who hunt and those who don’t, for those who eat meat and those who prefer not to. It may even make you look at your living room full of hunted animals in a new light, just maybe not the best reading light.

Candra Merreighn is earning an MS in Environmental Studies at Antioch University New England in Keene, New Hampshire. Her focus is on hunting as a conservation method. She is Humaneitarian’s summer research assistant.