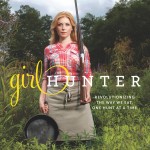 This book first caught my eye on a quick trip to the library to pick up some children’s books for my daughter. On my way to the library counter, I saw an interesting cover: a woman standing in a field holding a gun and a frying pan. The title pulled me in even further — “Girl Hunter.” Was this divine intervention?  How could the library gods have possibly known I would be there on that day and display the most perfect book written just for me, right where I couldn’t miss it?  Okay, maybe I built it up a little too much, but the book sounded right up my alley: my fiancee is an avid hunter and I will soon be participating in hunting myself.

Two weeks later, when it was time to return to the book, I was still on chapter one. I just couldn’t get into it but forced myself to finish. The author, Georgia Pellegrini, made the move from the world of finance to the culinary world in an attempt to get back to her family’s farming roots. After being ordered to slaughter five turkeys for the farm-to-table restaurant she was working in, she not only wanted to know the animals she was preparing in her kitchen, but also wanted to appreciate them and treat every part of them with integrity. Georgia believed the best way to do this would be to get out and meet animals on their own terms. She bought a shotgun and was on her way. Her collection of hunting stories make up “Girl Hunter” (Da Capo Lifelong Books, 2011).

Now, it may be that my hunting experience and views on eating meat are based in a very different background, but most of her stories read to me like those expensive hunts you see on TV, rather than attempts to gain a true life vision of hunting. When I think of hunting, I think of early Saturday and Sunday mornings, getting up before the sun and heading to a local spot that you or your hunting friends have attempted to keep quiet for years. It’s about knowing that spot like the back of your hand and waiting for the big buck you’ve been eyeing all season, or maybe calling in those turkeys you pass on the way to work every morning. To me, true hunting isn’t about travelling the world to areas you’ve never stepped foot in for animals you’ve never seen before. I had to remind myself multiple times that Georgia wasn’t hunting out of a need to eat.

She begins the book by explaining her desire to hunt, and starts out on a road trip of sorts. On her first hunt she finds herself in oversized camouflage and rubber boots borrowed from her brother, standing dwarfed by two older veteran hunters on an early morning turkey shoot. She ignores the advice of “slow and steady” and pulls the trigger too quickly on the first gun she has ever held. She inevitably misses and, in her embarrassment, realizes there is much more to hunting than “see-aim-shoot.” She meets a character known as the Commish, who quickly becomes my favorite person in the book. He takes her under his wing and brings her into the cigar-smoking, brandy-drinking part of the hunting world.

Georgia writes: “… for most hunters like the Commish, any hunt is about the experience itself, sitting here watching the sun rise with his dog, and his cigar, not really the amount of game they take… ‘My wife has always viewed hunting as ‘the other woman,’ he eventually says.”

As she proceeds, Georgia hunts everything from turkey to pheasants to pigeons to squirrels, and at the end of every chapter she includes recipes on how to prepare all the game mentioned in the chapter. But I felt that all of her “hunts” were too prepared and, for lack of a better term, expensive. Even the table of contents reads like a travel brochure!  For example, she goes on a traditional English pigeon hunt but speaks only momentarily about the difference in views on hunting depending on where you live. Thankfully, though, she did mention a rather important parallel which I found extremely interesting. While on her hunting trip in England, her companions asked her why Americans don’t have shooting clubs in schools.

“In America, guns are not associated with class,” she writes, “but with those who are less evolved — more ‘backwoods.’ Here in the ‘backwoods’ of England, however, shotguns and rifles are symbols of class and sophistication.”

The writing in the book is easy to follow, and Georgia’s small details bring you into the field next to her, but I personally felt that the real depth of the reason for hunting was missing. Then again, every hunt is for different purposes — hers were just more upscale than mine. So if I got anything from this book, it was a reminder that, if my career ultimately fails, I will still be able to prepare four-star meals for my family from the squirrels in our backyard.

Candra Merreighn is earning an MS in Environmental Studies at Antioch University New England in Keene, New Hampshire. Her focus is on hunting as a conservation method. She is Humaneitarian’s summer research assistant.