American bison: How is it raised? 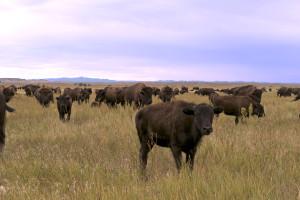 No one today – it’s pretty safe to say – prepares bison the way Meriwether Lewis and his Corps of Discovery did on the banks of the Missouri River in May 1805.

According to Lewis’s journal from that month, one of his men took a bison intestine, stuffed it with chopped kidney and other parts of the animal, added salt, pepper, and flour, then tied the intestinal ends.

“… it is then baptised in the Missouri with two dips and a flirt, and bobbed into the kettle; from whence, after it be well boiled, it is taken and fryed with bear’s oil…”

Adherents of today’s Paleo diet might popularize this delicacy again (it’s called boudin blanc, for anyone interested). But today most people consume bison as burgers or steaks – if they consume it at all. Bison is still hard to find in grocery stores and pretty much a niche delicacy.

Yet it’s showing up in some unlikely places — I saw it on a menu at a bowling alley recently — so I decided to investigate how the animals are raised. My latest article for Civil Eats attempts to give an overview. Turns out a large percentage of bison are fed grain and raised in feedlots toward the end of their lives, so the common perception that all bison graze “under purple mountain majesties, above the fruited plain” is not quite accurate.

Read the article, then make your own decision about what kind of bison you want to buy. A small but growing number of ranches are allowing their bison to eat grass and roam on open range for their entire lives — which is what they were doing when Lewis and Clark stumbled upon giant herds of these noble creatures, not so long ago.