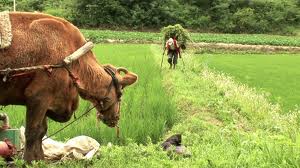 “We all have an ox who made us what we are today.”  — Lee Chung-ryoul

Until yesterday, I would have joined you in chuckling a bit at this statement. An ox?  Making me who I am today?  Ridiculous. Who uses oxen anymore, anyway?

But then, tired and worn out last night, I watched “Old Partner,” a short documentary film about an elderly Korean farmer and his aging ox. I was quickly reminded that I don’t know a thing about being truly tired and worn out. For the film shows the unvarnished, unglamorous side of subsistence farming, in this case in rural South Korea. The farmer and his wife — each permanently bent at 90 degrees at the waist, with stick-sized legs ravaged by disease — trudge daily into their grain fields, whether sick or exhausted, motivated by habit, pride, and poverty.

But the farmer has his ox, and the animal is his sole joy in his life. As the camera follows the quiet (and nearly deaf) 80-year-old man, it keeps an equally compassionate eye on the 40-year-old ox, who is suffering from old age, too. The ox is a living embodiment of non-complaining (in stark contrast to the farmer’s wife, who complains all the time), and though you wish the farmer would take better care of the animal, you can’t help but think that the stoic and serene ox is gratified just to be working, to be alive.

It’s rare to see a bond between a farmer and one of his animals on screen. This slow, quiet film may leave you in a puddle of tears, as it did me, but it will open your heart as it reveals this humble and touching relationship, born of mutual need. 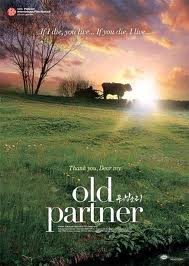 Interviewed on the Netflix DVD, the director, Lee Chung-ryoul, calls his 2008 film an homage to the parents of the current younger generations in Korea. These parents were rural farmers, had one ox, maybe two, to help them in the fields, and over decades of toil made it possible for their children to catapult into the cities for an easier life. The director recognizes that it wasn’t just the parents but the oxen, too, who helped raise the children, in a sense. Hence the quote of Chung-ryoul’s above, about all of us having “an ox who made us what we are today.”

For us in America, there may have been an ox in our ancestors’ past who helped them defy poverty, farm successfully, and raise the children who eventually raised us. Or there might have been a loyal sheep dog, or a prize boar, or a steady mare. After seeing “Old Partner,” you may realize that your ancestral family tree needs to be expanded a bit. The gratitude that this film radiates toward farm animals is unbounded.