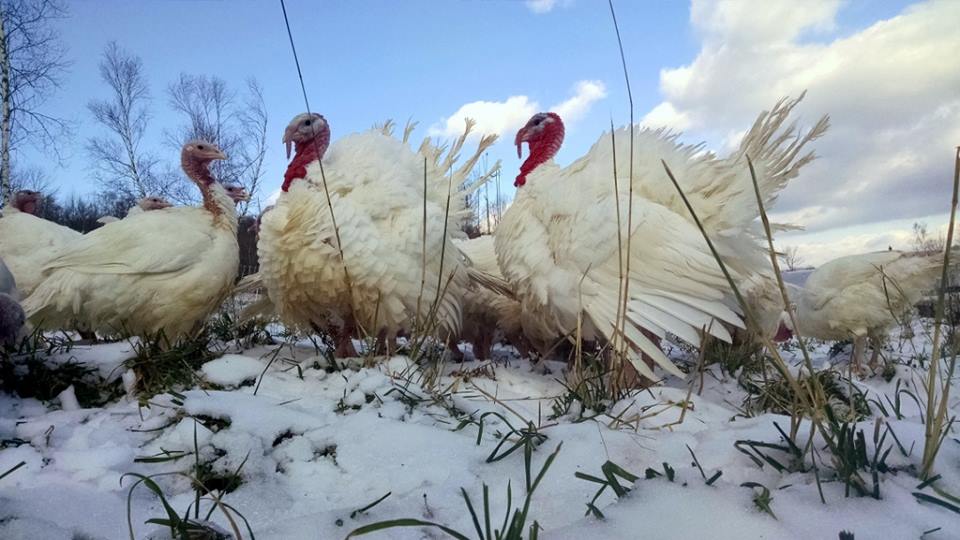 You’ve done the right thing and bought a pasture raised turkey for Thanksgiving. You’re pleased that your Tom had a normal, active life eating bugs and using its legs in the fresh air and sunshine.

It would be terrible if you then cooked your humanely raised turkey the way you once cooked factory farmed turkeys. If you did, the meat would be dry and bland. Your guests would be turned off of pasture raised poultry forever – and we don’t want that to happen.

So keep in mind these points when you’re cooking your pastured turkey next week.  (Haven’t gotten a pastured bird yet and are wondering how to do that?  See this post from last year.)

As author Shannon Hayes of The Grassfed Gourmet Cookbook says here, figure on 12-15 minutes per pound, uncovered, at 325 degrees. (The recommendation for factory farmed turkeys is 20 minutes per pound). Pastured birds require a shorter cooking time because they have less fat on them. They’ve been running around a pasture all their lives, not been stuck in a cramped indoor facility, and just like you and I if we did a lot of running, their legs are leaner.

Now, although pastured turkey cooks faster, some enthusiasts advocate lowering the temperature even below 325 and slow roasting the bird, in some cases overnight. Check out this post from Nourished Kitchen for more on this approach.

But please: don’t take your turkey out of the oven based on the amount of time it’s been in there. Take it out when the internal temperature reaches 165 degrees (see #3, below). Use Shannon Hayes’ time/pound estimate to simply keep your day flowing smoothly. Nothing worse than taking a fully cooked turkey out of the oven before your guests have even arrived.

2. The breast will probably be smaller, the thighs larger

Modern turkeys have been bred to produce a lot of breast meat, which is popular with consumers. As a result, the dominant turkey breed in America — the Broad Breasted White — has an unusually large breast. Often, this extra weight isn’t able to be fully supported by their legs, so they topple over and break their legs, or suffer respiratory problems, and they can’t even reproduce naturally because they’re so large.

Thankfully, when Broad Breasted Whites are raised on pasture, they use their legs and thus strengthen their legs to support the extra weight. They also enjoy fresh air and sunshine and eat bugs and worms, as they were meant to, thus improving their overall health. You should know that a lot of small-scale, pasture-based farms raise Broad Breasted Whites, because their customers want the breast meat, but these turkeys fare a lot better on pasture than they would have in industrial facilities.

As stated above, don’t go by the clock when determining when to remove your bird from the oven. Go by internal temperature. The USDA recommends that a turkey reach 180 degrees F, but that’s a guideline for factory farmed birds. Pastured poultry experts say 165 degrees F is the temperature you want so that your turkey doesn’t dry out. Get yourself a meat thermometer (they don’t have to be expensive), and on Thanksgiving Day make sure the thickest part of the thigh on your pastured turkey has reached 165 F.

If you need basic instruction on how to cook a turkey, this recipe and video tutorial from White Oak Pastures could help. Or, here is a comprehensive tutorial from the New York Times, but it doesn’t address the differences to expect with pasture based poultry.

Some food bloggers recommend brining your turkey before cooking, which imparts more flavor and juciness to the meat. You can prepare a brine — a solution of salt water and seasoning — as the blog Mommypotamus instructs in this post. But Shannon Hayes says pastured birds are naturally juicier and more flavorful, so brining isn’t necessary.

It all comes down to the fact that pastured turkeys are “athletes,” as White Oak Pastures puts it. Active turkeys raised outside allow us to celebrate Thanksgiving in a way that’s in line with our values about how animals should be treated. We can honor the bird on our table knowing it had the best life possible, and we can give thanks for the farmers who brought us this tasty alternative.