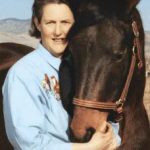 She is animated and plain-spoken, blunt and funny, and her brilliant mind works so fast that when you hear her talk, you feel out of breath just listening to her.

No wonder Temple Grandin has done more to reform American meat production – and more to help us understand the behavior of the farm animals that become our food – than any other individual. And she’s done it all as an autistic person, overcoming social and intellectual challenges that most of us couldn’t imagine.

At a talk she gave yesterday at the annual Vermont Grazing & Livestock Conference, Grandin spoke on the subject that has made her so respected and influential: the behavior of farm animals, and how farming and slaughtering systems can be adjusted to respect that behavior and make life less stressful for the animals.

Did you know, for example, that the following things really upset livestock?

Once these things are removed or stopped, livestock become calm. That’s better for them and the people who work with them, and Grandin (a professor at Colorado State who figured this out, in large part because her autism gave her a unique understanding of animals) has helped numerous meat packing plants and slaughterhouses amend their facilities and practices.

Because of her work, Grandin has a bird’s eye view of what’s happening in industrial agriculture. I was particularly interested to hear that she approves of installing video cameras in large slaughterhouses for monitoring workers, as a way to “keep people from doing the right thing only when the lady with the clipboard [auditors like herself] comes around.”

Also of note, she was asked about her work with the Certified Humane program. An audience member was concerned that this humane certifier doesn’t require animals to be outdoors; he called that “greenwashing.” Grandin said it’s inevitable that there will be different standards out there, but declined to give an opinion on the issue because, “I’ve got to work with everybody.” Then she advised the man kindly, “Sell your product. Don’t bash the competition.”

From the audience, I asked her what industrial agriculture practices she’d like to see ended. She said the use of gestation crates for sows (this is when pregnant pigs are kept in tiny crates for their entire 3-month pregnancy, unable to turn around) and the use of cages for egg-laying hens. These happen to be the top priorities of organizations trying to reform factory farming.

You can read more about Grandin’s work on her website, but the best way to learn about her life is by watching the excellent HBO movie, Temple Grandin, available on Netflix.