McDonald’s to phase out gestation crates 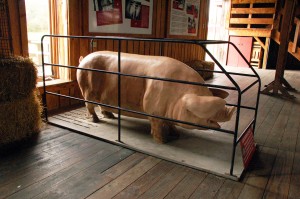 This is a model of a gestation crate. It’s the kind of crate where a factory-farmed sow (female pig) is kept when she is pregnant – which ends up being most of her life, since industrial food companies breed sows nearly constantly, for maximum profit. A sow in a gestation crate literally cannot turn around, cannot come in contact with other pigs, and has nothing to occupy her mind for her entire 3-month pregnancy.

There’s been a huge outcry against gestation crates (8 states have banned them), and this week, seeing the writing on the wall, McDonald’s announced it will ask its pork suppliers to develop plans to phase them out. It’s unclear what the timetable is, and McDonald’s might drag their heels, but Humaneitarian will let you know of any opportunities to contact the Golden Arches and put pressure on them to speed up this change.

Gestation crates, by the way, were developed because pregnant sows tend to become violent with each other. But a form of group housing can prevent this problem and will probably be adopted widely in America some day – if consumers like us keep demanding humane meat.

Here’s a good article from the Chicago Tribune that puts this announcement by McDonald’s in the context of the chain’s history.  Update: On March 22, 2012, the fast food chain Wendy’s also announced that it is working with its suppliers to phase out gestation crates.

Back to latest news.