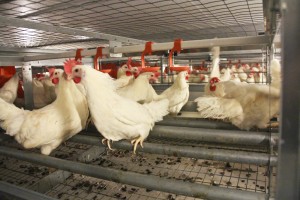 2016 UPDATE:  This legislation did not pass, reportedly because of resistance from non-poultry agricultural industries, and it is now dormant. We’ll update you if it returns to the public eye.

We don’t cover egg production on Humaneitarian (yet) but wanted to share this major news.

The United Egg Producers and the Humane Society of the United States have long been adversaries. The UEP is a cooperative of American egg farmers who raise 95% of all laying hens, most of which are tightly confined in empty (barren) cages to maximize egg production. The HSUS is the leading voice for animals in factory farms, working to pass legislation that improves living conditions.

You can imagine their differences. As the Huffington Post said, “If they had announced that they were agreeing on the best shape of pasta, it would have been news.”

Yet on July 7, these two organizations agreed to jointly push for new federal legislation that would improve the lives of laying hens. If passed, the legislation would:

The agreement marks a willingness among industrial egg farmers to move in a more humane direction. (Attention, eaters: your choices do make a difference.) The law would also bring American egg farming in line with what the European Union is now requiring. And it would be the first federal law relating to the on-farm treatment of any farm animal.

However, there is disagreement within the animal welfare community about whether this is the best approach to take. As outlined in this statement by the Humane Farming Association, some groups believe that the amount of space allotted each bird will still be too small for adequate movement and that the law would give the impression that cages are acceptable. (The HSUS maintains that cage-free eggs will still be more desirable to consumers and that food companies will continue to switch over to cage-free eggs — as Subway, Denny’s, and other chains have.) On the other side of the coin, some in the meat industry believe this will be a “slippery slope” leading to more regulation of American farming, even though there are a slew of agriculture laws already in place that govern food safety, slaughter practices, etc.

For its part, the UEP sees greater efficiency. “We know that the enriched cages seem to have a lot of advantages over traditional cage systems, and they also have some advantages over cage free,” a UEP spokesman told the Huffington Post. “There’s also the fact that a single national standard is preferable to a patchwork of state regulations — for our producers, our customers and for consumers.”

What do you think?  Should improvements for farm animals come through baby steps or big leaps?  You can read more about the agreement here and comment here.

Back to latest news