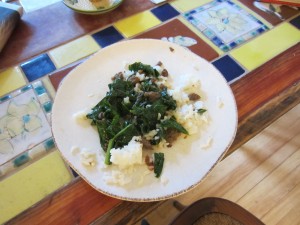 The other night I was cooking a quick dinner, trying to use up a blast of kale from my garden, when it hit me: an inexpensive way to start eating humanely is to cook with humanely raised ground beef (or ground pork or lamb).  Sure, a package of grass-fed or locally-raised ground meat costs more in dollars than a package of the industrial stuff — that will never change, unless the laws of economics do (or maybe the Farm Bill). But what makes humanely raised ground beef, pork or lamb not-so-costly in the end is how you use it: as the flavoring in a dish, or as the smallest part of a meal.

What I was making was a simple dish: stir-fried kale with ground pork over rice. In the past I had prepared this with roughly equal parts of pork and kale, but because I had SO much kale from the garden, I threw a massive amount of the green stuff into the pan. Then I realized that I didn’t have much ground pork but threw it in anyway. The proportion ended up being 2:1, kale v. pork (even with inevitable kale shrinkage), and despite the lopsidedness it still tasted great – it didn’t need more pork to make it any better.

I’m sure I’ve cooked meat/vegetable dishes in this proportion before, but I’ve never connected it to cost. If I were to make the pork/kale dish using equal proportions, of course the local pork I used would be more expensive. But when I use less of it, treating it like the valuable treasure that it is (it came from happy pigs), and I make the kale from my garden the centerpiece (beautiful, impressive kale, if I may say so!), I end up spending as much per meal on the meat as I would if I’d purchased supermarket pork and cooked it the “equal parts” way.

In other words, we can make our dollars s-t-r-e-t-c-h when it comes to humanely raised meat. Ground beef, pork or lamb is good for this because a smaller portion can be scattered or dispersed within a dish and you don’t notice too much. (It’s a little more challenging for the mind to see a smaller sized hamburger or pork chop on the plate — but eventually we can eat that way, too.)  Yes, one could eat in a 2:1 proportion using factory farmed meat and save even more money, but this strategy is for people who want to eat in accordance with their ethics while not increasing their current food budget. (Some folks are ok with spending more for humane meat, and are financially able to do so, but they might choose the 2:1 option, too.)

Here’s an invitation, then. If you aren’t buying any humanely raised meat right now because of the cost, commit to at least buying humanely raised ground beef, pork or lamb (grass-fed, pasture-raised, organic, local — see this guide for more labels). Keep making dishes you like that use ground meat, just use a little less. (I’m thinking lasagna, moussaka, chili, tacos.) You’ll still get to eat meat, but it gets to be from happy animals, and your grocery budget gets to stay grounded. 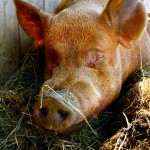