Beefing up with Philly CowShare 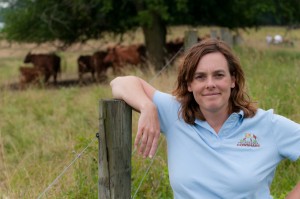 It’s an old-fashioned concept, but forget about that for a moment. Right now, just appreciate how unusual it is in our modern society. We’ve gotten so used to buying meat in small packages at the supermarket that buying half a cow, or a quarter of a cow, and heading down to our basement freezer to get cuts of beef whenever we need them is radical for most people.

Radical, but a practical and economical approach to getting healthy, humanely raised meat into one’s home. And it’s such a new concept that Philadelphia CowShare seems to be the only business in the country that’s helping people do it.

Normally when folks buy quarters, halves or wholes of a cow, they’re rural people, buying directly from a farmer. There’s mutual coordination, a necessary understanding of butchering on the part of the customer, and possibly just a handshake agreement.

Philadelphia CowShare, on the other hand, acts as the coordinator, the intermediary, between eastern Pennsylvania cattle farmers and Philly urbanites who want a steady supply of local grass-fed beef. And at the end of the day, more money is left in the pockets of both sides, as buying in bulk helps consumers save money and selling in bulk provides farmers with more revenue.

In other words, Philadelphia CowShare facilitates the kind of exchange that took place for centuries between farmers and families on town commons and market squares.

“I do think I was a farmer in another life,” says Jessica Moore, who launched Philly CowShare in 2010. A former developer of technological and web-based consumer products, she got the idea for the business when she became a mom and began looking for local meat. When she asked a farmer if she could buy a quarter of a cow, he looked at her like she was crazy but offered her a whole one. She had to find other people to buy the remaining three-fourths of the animal, and after doing that for a few years “it got very easy” to find them. An idea was born.

Much has been written about “cowpooling” in recent years, but that describes friends, family members, or co-workers who self-organize and strike their own deal with a farmer to buy beef or raw milk. However, Philadelphia CowShare offers pre-set shares, available for ordering on the web, that come in an eighth (43 lbs.), a quarter (86 lbs.), or half (172 lbs.) of a beef cow, or the whole shebang. Jessica talks you through the cuts you’ll receive, oversees the butchering, delivers the boxes of meat, and finds other families or individuals to split the cow. Or groups can form on their own and buy a share together.

In 2011, Jessica facilitated the sale of 55 cows raised in counties around Philadelphia to roughly 200 customers (shareholders). This year she’s on track to supply 180 to 200 cattle. She visits all the farms that she chooses to work with (most within 150 miles of Philly, and one in upstate New York) and makes sure they’re raising cows on pasture, providing antibiotic-free meat, and managing their land in a sustainable way. All the cows are processed at the same USDA-inspected slaughterhouse in Lancaster County.

Jessica notes that just because you buy a lot of beef in a cow share doesn’t necessarily mean you eat a lot of beef. A quarter of a cow (86 lbs.) feeds her family of 2 adults and 3 children under age seven for a year, and they eat beef only once, maybe twice, a week. That quarter share costs $779, but that’s apparently less than what you’d pay for 86 lbs. of individual cuts at farmers’ markets or co-ops.

One Philly CowShare customer, Michele, splits a whole cow with people at her Philadelphia gym. She’s the group’s “cow-ordinator,” making sure a whole cow is delivered every two months and distributed among the 8 to 12 gym members who buy the animal together. In the boxes there’s steaks, roasts, briskets, ground beef and other cuts, all from the same animal, all packaged in 1/8th boxes to make distribution easier. Michele, a former pescetarian, says that when she first received her box, “nothing was overwhelming…  I realized I could do something with everything.”

Buying a cow share also benefits farmers. Jessica notes that the average beef cattle producer makes 15% for every dollar spent on beef, but she estimates that the farmers she works with make 50% on the dollar. There are no middlemen to pay — businesses that would package, deliver, and market the cuts, or the stores that would mark them up. (Philly CowShare is very much a business, though, and Jessica, 37, does earn an income from it).

And what about the cooking of all this beef?  A cow share, which might include a number of unfamiliar cuts, can inspire customers (and their friends who come over for dinner) to prepare beef in new ways. They might cook up tougher cuts that actually taste delicious if prepared creatively. In this sense, cow shares function a lot like CSA vegetable shares.