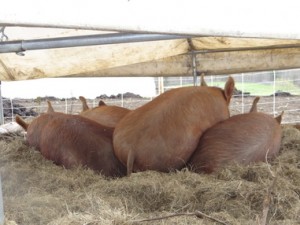 I am learning to slow down. Chores on a farm teach you to do this. Yes, there is an endless list of things to be done — “the 40-hour work day,” as farmer Mari says. But if chores are done sloppily, you can be left with a 60-hour work day instead. You might, in your rushness, forget to replace the safety pin that provides an extra hold on the boar’s gate, and find the big fella breeding the sow under the night stars. Or you might leave a hose on in the chicken pasture, and the next morning find a wetland where the waterer used to be.

No such things have happened during my internship so far, and they won’t if I can help it. And I will help it — by realizing that taking care of animals is not like being a journalist on deadline. Slow down. Look around. Double-check.

And what is the result of slowing down and deliberately doing chores?  Animal gifts.

A couple weeks ago, I walked up to the pig pasture at Green Mountain Girls Farm, fed the 10 pigs their afternoon grain, filled the water vessels, and checked on the amount of bedding under the tarp. Then — unusual for this workaholic — I took a few minutes and did what tens of thousands of farmers have done for eons (and what happens rarely in factory farms) — I stopped, stood quietly, and patiently observed the creatures I was entrusted with.

Eventually one approached me. The biggest of the 10 market pigs, he lugged himself over and stood against my leg, as if leaning on a lamp post, waiting for the bus. His tiny, humanlike eyes darted up at me quickly, guiltily, as if to ask for a belly rub — oh please, oh please! At least that’s what I wanted to think. I liked him and wanted to show it. He was the pig who was always off by himself in the paddock. While the nine others were rooting together in a pack, squealing at each other and being rather juvenile, he’d be off contentedly on his own. A quiet person myself, I could relate.

“Hello, introvert,” I said. “We’re very much alike.”  I scraped my fingers along his tough back, scratching the bristles like a brush. And whenever I’d start to leave, feeling a bit guilty for loitering when there was other work to be done, he’d follow me – not in a demanding way, just sheepishly wanting a little more love.

Similarly, last Thursday I was given the task of putting down fresh shavings in the enclosure where the goat does are kept before milking, so I was alone with the ladies for a while, and decided to get to know them. Ingrid — she of the small ears and Hollywood namesake — broke away from the clatch at one point and came up to me softly to take a place next to my leg. When I bent down to be with her at eye level, she licked my nose profusely, for no apparent reason. I thought perhaps she was craving salt — I’d known dairy calves to lick human hands for that. But then I stood back up straight, and she still refused to leave my side.

When you slow down, you receive animal gifts. 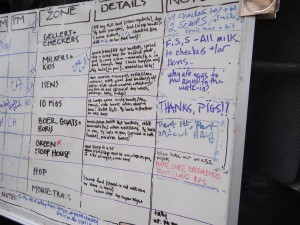 Gratitude on the chore board

When I returned to the farm this past week, I was sad to hear that the 10 pigs, including my oafish, introverted one, had finally been taken “to market.” But that sadness, I quickly realized, was for me, not the pigs. I was sad that my favorite pig would not be there to give me some happiness. It was all about me. I was not necessarily sad for my pig, as he would soon be meeting the swiftest of ends after a sweet and solitary life. After spending his days pretty much on his own, he would soon be taking his place in the cycle of things.