We sat on the grass, next to a stone wall for warmth (chilly: April) and watched as the woman whipped out a floppy, cuddly, cottony, stuffed lamb from a bag. Those of us at the lambing & kidding workshop (on how to monitor and assist the birthing process in sheep and goats, also known as lambing and kidding) were intrigued. She brought the stuffed animal to a large plastic storage box, placed the animal inside, and asked for a volunteer. 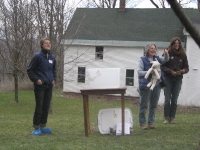 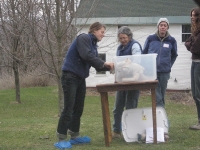 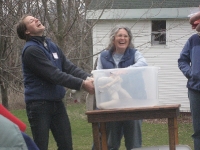 The fearless Lauren, fellow intern at Green Mountain Girls Farm, jumped up to help. And the woman, Tatiana Stanton of Cornell University, told Lauren that an actual sheep’s pelvis was inside the box, that she’d made a hole in one of the long sides of the box, and that she’d placed the lamb in one of a number of dangerous positions near the pelvis that cause ewes to have trouble birthing. Lauren was to pretend that she was assisting in the birth and had to remove the animal without “harming” it.

Granted, it was just a stuffed animal, but the photos show that the exercise was a hoot — and instructive! Melissa, another fellow intern who’d joined our little caravan from the farm to the other side of the Green Mountains, also tried extracting the fake lamb, as did other participants. Most of them had, or would soon have, small ruminants on their farm or homestead, and might soon experience the need to roll up their sleeves, stick their hand in the rear end of a sheep or goat, rearrange the legs, feet or head of an infant animal, and survive the whole stressful experience without too many scars — literal and figurative. 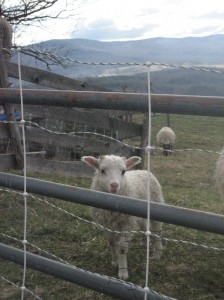 Much as I love James Herriot’s tales of being a selfless vet in rural Yorkshire, England, I don’t anticipate helping with small ruminant births anytime soon (maybe one day…). But I appreciated the workshop (held at the beautiful Knoll Farm in Waitsfield, which raises Icelandic sheep for wool, meat and breeding stock) for demonstrating how dedicated you have to be to raise sheep and goats. Not only must you be on guard around the mamas’ due dates — and possibly be James Herriot for a few hours — you also have to prevent and combat a seemingly vast number of diseases and parasites. In fact, sheep in America are so prone to parasites that it’s hard to find organic lamb (the organic standards prevent the use of dewormer).

Stanton’s workshop (she is Cornell Extension’s small ruminant specialist) also confirmed my suspicion that there are many different names for farm animals, based on various combinations of age, gender, and sexual maturity. After hearing Stanton refer to “wethers” and “dams” (as opposed to “the damn weather,” which you hear a lot in Vermont), I wanted to learn these names, and thought that consumers of humanely raised meat might want to know them, too. So I compiled this selective list. Let me know if more terms should be added to it. Here’s to farming and all its nuances!

Cattle
bull: male, usually over 1 year, able to breed
bull calf: male, under 1 year
bob calf: male, one to three weeks
steer: male, over 1 year, castrated
heifer: female, before the birth of her first calf
cow: female, has had at least one calf

Pigs
sow: female, has had at least one litter
gilt: female, before first litter
piglet: young pig
boar: male whose function is to breed