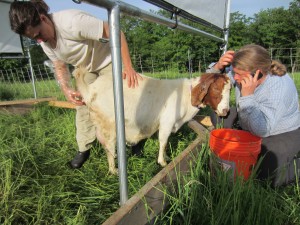 Laura and Mari, with Wangari the goat

After a few contractions and no progress — save for a tiny hoof that was visible, then not visible, then visible again — Mari called Laura to say, “I’m sorry, maybe I wasn’t too clear in my first call. It’s a more complicated birth than you might think. You should come down now.”

Laura was up at the farmstand, greeting new customers. Mari and I were in the farm’s goat pasture down the road, by the neighbor’s house. Near us, a clatch of mama goats were chomping grass that was as high as they were, with their baby goat kids at their side. Wangari, the Boer goat about to give birth, was under the tarp shelter, focused and concentrated, and, it seemed, utterly alone.

We were there to help, of course, to assist in whatever way we could with her labor, but ultimately — as with every female who gives birth, everywhere, of any species — she was on her own. She had to go through with this herself. Mari and I kept a respectful distance and breathed calmly with her, perhaps intuiting something about labor even though neither of us has had children. “Oh, I hate that sound,” Mari said, responding to some teeth grinding that Wangari was doing. “It’s a sign of discomfort.”

Wangari leaned her forehead against a pole of the shelter, closed her eyes,   and — heaving, pushing — left me with an image of universal motherhood I will never forget.

The tiny hoof emerging from her didn’t budge, despite all the contractions. There was only the long string of mucous hanging from her vulva, which had alerted me, 15 minutes earlier when I came down to do goat chores, that she might be in labor. Fellow interns Lauren and Melissa, about to depart for a food event in Burlington, came down briefly and drew on what they had learned at a recent goat kidding workshop to figure out what position the kid was in. We all concluded it was probably on its back, and knew it was good that the hooves were emerging first, though we weren’t sure if they were the front hooves or the back hooves. 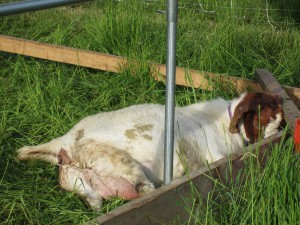 Wangari, with small hoof emerging from her

Laura, who I would soon learn is remarkably calm in a crisis, arrived with alfalfa, molasses, oxytocin, a syringe, plastic gloves, towels, jackets, and confidence. She put on a long plastic glove and reached right into Wangari. Feeling around, she gave us various theories as to the position of the kid, even looked over to the month-old kids eating grass nearby to figure out what the shape of a kid’s back leg might feel like. Every time Wangari had a contraction, Laura pulled, but the legs barely moved. Mari held Wangari’s head to steady her against Laura’s pulls. I fed the doe bits of alfalfa and held molasses water at her mouth, which she lapped up eagerly.

Mari, noticing that some of the fluids coming from Wangari had a concerning gray tinge to them, fumbled with Laura’s nearly-dead cell phone to call their vet, Allison. Two very matter-of-fact women talked to each other by speaker phone. “Can you feel the tail?” Allison asked. “Yes!” Laura replied after a moment. “Ok, that’s good,” Allison replied, and instructed Laura to place a large amount of lube in a syringe and inject it far into Wangari, to assist with the pulling. Mari biked up to the barn to fetch the lube and syringe, and Laura took a breather.

The black flies were out. It had rained a few hours earlier and the pasture grasses smelled like candy. The sun was blindingly bright, in the way it can be after a rain, but then it started to dip behind the ridge behind the neighbor’s house, and the air began to cool. Mari returned with the lube, and as we were squeezing it into the syringe, she joked, “Hm, I’m getting older, I could learn something from this!” 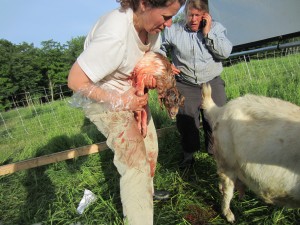 We never had to use the syringe. Before putting it in, Laura pulled one more time, and everything gave. The kid slid out in one go. “Is it alive?”  Laura asked. “Yes, it’s breathing,” said Liva, the farm’s produce manager, who had just come down to deliver fresh towels and support. We took those towels and rubbed the kid to get him dry, though we competed with Wangari, who immediately began licking the goopy, mucousy, bloody little guy all over, like there was no tomorrow. Laura speculated that his large size might have contributed to the difficult birth.

And then we noticed that the kid’s breathing was raspy, as if it had fluid in its lungs. Mari got on the phone again with Allison, who told us to hold the kid upside down by its legs, pat on its chest, and massage its nose to encourage the expelling of fluid. She also said through the speaker phone, “Keep doing that until it dies or lives.”  We glanced at each other uncomfortably, aware that, yes, as vets know all too well, death was a possible outcome. 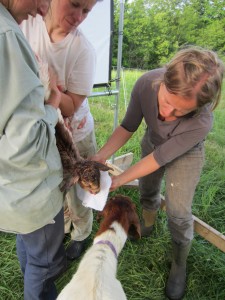 I had the job of rubbing the little guy’s nose, and every now and then mucous would come out. Laura held him upside down by the legs while Mari and Liva patted him on the chest. Mari even gave the kid brief CPR. (“Salty.”)  We just kept doing that, until all of a sudden he gave a little bleat that didn’t sound raspy at all, just sounded like the bleat of all the other little goats in the pasture, and I think we all believed at that point that things might be ok.

“Look at me, I look like I’ve just done butchering!”  Laura exclaimed when Mari went to get the camera. The entire front of her white t-shirt was bloody. “Uh, that’s the other end of the process,” I replied.  Crises can indeed inspire some ribald humor, but did I mention I had tears in my eyes? 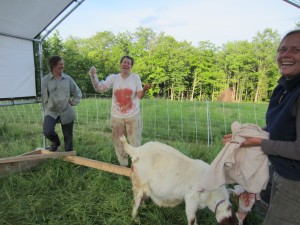 There was still the possibility that Wangari had another kid to birth — she was pawing the ground, the way goats do when in labor — so Laura reached in yet again.  She wasn’t sure what she found, then said, “Oh. I think there’s a dead kid in there. It’s really small. It must have happened a long time ago.” She pulled out a dark gray sack that showed the outline of a small goat skeleton inside. You could see the legs, the skull — and it was still attached to part of Wangari’s afterbirth. Mari was curious to find out later when the goat might have died, so she asked me to take a photo of the fetus to show the vet. “Just don’t put that one on the blog,” she added dryly.

We took Wangari and the new kid back to the barn, along the road. Laura and I joked that with this fossilized fetus hanging out of Wangari, we really, really hoped that a neighbor wouldn’t drive by at that moment. It turns out the sack fell off of Wangari as she walked. (We scooped it up, and it will likely get composted, to help foster life somewhere else.)  I held the new kid in my arms, wrapped in a towel. His little heart was beating fast, and he was bleating with a bit of raspiness, but the fluid seemed to be in his nose, no longer in his chest. 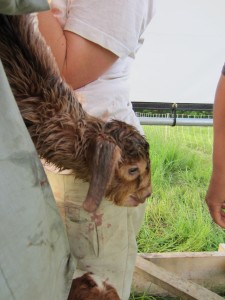 Wangari and the kid were placed in the barn, on fresh hay, and the doors were closed for the night.  “Good work, team,” Laura said to Mari, Liva and I.  It’s remarkable, the extent to which Laura and Mari always think in teams. I’ve never felt so much a part of a team since my last newsroom job nearly 10 years ago. And yes, it was indeed good work, by all involved (including the vet, who guided us through some difficult moments while she was handling her own kids at home). The whole process lasted about two hours. But I still had chicken chores to do — I’d been on my way to do them when I discovered Wangari in labor. Picking up where I’d left off made the birth seem all the more like just a daily part of life on the farm.

I walked toward the chickens and looked up at the gold-green mountains, illuminated by the setting sun, and realized, for some inexplicable reason, that I would never be the same again. There is no way we can separate life from death, or death from life.

This morning (the day after) I called Laura for an update. Wangari is fine, and the new kid is big and strong — and stubborn! But he isn’t quite grasping the concept of milking. Laura thinks this is because he’s an only child, and doesn’t have a sibling to show him what to do. A neighbor is patiently spending time with mama and baby today, helping the process along.

I have a yellowing copy of “All Creatures Great and Small,” the classic account of a country veterinarian’s life by James Herriot. I’ve marked various pages that have good quotes, and I found this one this morning: “Animals are unpredictable things, so our whole life is unpredictable. It’s a long tale of little triumphs and disasters, and you’ve got to really like it to stick with it.”